Is COVID-19 a Bioweapon?: A Scientific and Forensic Investigation (Hardcover) 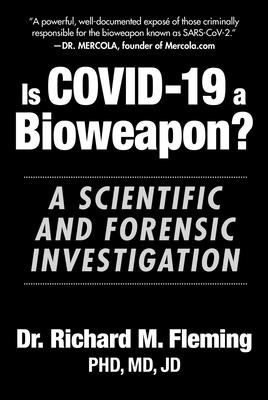 Is COVID-19 a Bioweapon?: A Scientific and Forensic Investigation (Hardcover)


Backordered
What is the true origin of COVID-19?

President Joe Biden has ordered US intelligence agencies to further investigate the origins of COVID-19. Clearly, the US government isn't decided on what really happened at the start of the pandemic. Was it truly a animal to human transmission to be blamed on a bat in a Wuhan, China wet market? Or was a much more sinister plan at work?

In 2020, Dr. Richard M. Fleming began investigating SARS-CoV-2/COVID-19. Using both his "Inflammation" Theory and Patent (FMTVDM; the first method capable of measuring regional blood flow and metabolic changes occurring inside the body, which makes it possible to accurately determine what is happening inside the body as well as whether treatments prescribed for patients are working or not), he investigated COVID treatments. Simultaneously he began investigating the origins of COVID-19. This book details much of what he has found.

What he discovered will shock you.

By 1999, US Federal Agencies began funding Gain-of-Function research. Research that by its very nature is designed to increase the ability of pathogens to infect and harm people. In 2019, one of those pathogens was intentionally released upon the world in the Wuhan Wet Market. The key to proving and understanding this bioweapon is its spike protein. The very same spike protein now being made in millions of people after the COVID vaccines are injected into them. These vaccines are nothing more than the genetic code of this bioweapon. This book traces the publication and money trail of COVID-19; showing who is ultimately criminally responsible for the design and development of this weapon, which violates the Biological Weapons Convention (BWC) Treaty, exposing those who have committed crimes against humanity. Dr. Fleming will reveal the ultimate conspiracy: one that puts the future of the entire world at stake.
Dr. Richard M. Fleming is a physicist, nuclear cardiologist, and attorney with fifty-three years of research experience. He has spent decades investigating what causes multiple health problems including heart disease, cancer, and SARS-CoV-2/COVID-19. He joined the American Heart Association in 1976 and actively began teaching and researching heart disease; including both what causes heart disease and how to accurately find heart disease. In 1994 he presented his original theory on "Inflammation and Heart Disease" which was published in a cardiology textbook in 1999 and presented on 20/20 in 2004. His research career has also involved investigating and correcting errors made in medical testing including coronary arteriography and nuclear imaging; for both heart disease and cancer. In 2017 after two decades of work he patented the first method capable of measuring regional blood flow and metabolic changes occurring inside the body. This method known as FMTVDM (Fleming Method) makes it possible to accurately determine what is happening inside the body as well as whether treatments prescribed for patients are working or not. In 2004 after reducing the amount of radiation he was giving patients for nuclear imaging tests of the heart he was accused of billing fraud. After evidence was hidden from the jury he agreed to a plea deal that did not state a crime making it possible for him to protect one of his children.
“A powerful, well-documented exposé of those criminally responsible for the bioweapon known as SARS-CoV-2. Dr. Fleming reveals the published studies detailing how the engineering of this virus has unfolded over the past twenty years. He also documents the money trails of those involved. A short and exciting read.”
—DR. MERCOLA, founder of Mercola.com, the most-visited natural health site on the internet for the past twenty years

“What is as remarkable as it is rare in science in Dr. Richard Fleming’s book is this systematic, exhaustive, ‘bulldozer’ approach. Like these immense GMO agricultural robot-machines guided by GPS, capable of stopping on the slightest mound or suspicious anomaly, he leaves nothing in the shade; he ‘plows’ this enigma of the birth of SARS-CoV-2, going back to its distant genealogical ancestors, also already manipulated in the laboratory. Like a criminal investigation, it tracks down the slightest patent or conflict of interest among these illustrious scientists with an unassailable aura, or among these respected foundations that were believed to sow good for humanity.”
—PROFESSOR JEAN-CLAUDE PEREZ

“This richly informed book takes you through the nefarious intersection of politics and the weaponization of science that is deeply dispiriting. It exposes the corruption and collusion of governments that threaten our very existence. This is an important book as it takes us towards the truth and gives us hope that many scientists, such as Dr. Fleming, are risking everything in order to bring the guilty to justice and find solutions for mankind.”
—MELINDA MAYNE, attorney and barrister

“Cometh the hour, cometh the man. In a world where we find ourselves unwitting victims of the greatest crimes ever perpetrated against humanity, we must be thankful for the fearlessness of research scientist Dr. Richard M. Fleming in laying bare, in this book, the incontrovertible evidence that the SARS-CoV-2 virus is a bioweapon deliberately engineered using Gain-of Function research, which has been used to lay waste to countless lives and wreak havoc on a global scale. This book exposes those criminally responsible and hopefully in the fullness of time, it will be instrumental in helping to bring them to justice.”
—KAIRA McCALLUM, JP BSc