Does Putin Have to Die?: The Story of How Russia Becomes a Democracy after Losing to Ukraine (Hardcover) 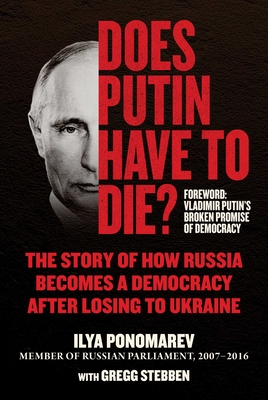 Does Putin Have to Die?: The Story of How Russia Becomes a Democracy after Losing to Ukraine (Hardcover)


Not On Our Shelves—Ships in 1-5 Days
The Story of How Russia Becomes a Democracy after Losing to Ukraine.

To understand the significance of this book, Does Putin Have to Die?, you must first understand the significance of the author: Opposing Putin is a risky proposition; for instance, a fellow Russian Parliament member turned dissident, Denis Voronenkov, was on his way to see Ponomarev when he was shot and killed in March 2017 by Russian intelligence.

Ponomarev has lived in Kyiv since 2016. As a result of Voronenkov’s murder, he now receives personal protection by the Ukrainian Security Service. And as he said in a recent television interview, “I keep a machine gun by the door.”

But if you ask Ponomarev why he joined Ukraine’s armed territorial defense forces, he will reply:

In this book, Ponomarev offers his plan for how the Russian people can purge their country of Putin, Putinism, and dictatorship, and turn it into a democracy.

llya Ponomarev is a Russian politician, tech entrepreneur, and investor. A member of the Russian Parliament from 2007–2016, he chaired the Innovations and Venture Capital subcommittee, and became a leader of the Russian protest movement in 2011. Forced into exile by Putin in 2016, he moved to Silicon Valley and then Kyiv, where he established an investment company that, as the first Ukrainian company traded in the US, went public on NASDAQ in 2018. He’s a regular speaker at US-based think tanks like Atlantic Council, CSIS, and Heritage Foundation; at universities like Yale, Stanford, and MIT; and he’s interviewed frequently by leading US and European media.

Gregg Stebben is the author of 20 books, including White House: Confidential and Internet Privacy for Dummies. In his career as a journalist for media brands ranging from Forbes to Esquire to Men’s Health, he has interviewed hundreds of newsmakers and politicians including US Presidents Trump, Clinton, and George H. W. Bush, and Soviet President Mikhail Gorbachev. He is a frequent guest on radio, and a veteran of over 15,000 interviews on local US radio stations and syndicated shows. In March 2022, he went to Poland and Ukraine to report live on the Russian invasion.

"Putin’s Russia is a challenge for all of the free world; maybe the biggest ever. It is great to see Russians who are ready to not just criticize him, but to fight against him with all means—and to propose a better future for the country. Thank you, Ilya!”
—Oleksiy Honcharuk, former Prime Minister of Ukraine