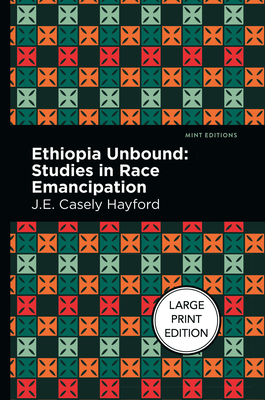 Ethiopia Unbound: Studies in Race Emancipation (1911) is a novel by J. E. Casely Hayford. Published at the height of his career as a politician, journalist, and activist, Ethiopia Unbound is considered the first pan-Africanist work of fiction and among the earliest English novels written by an African author. " T]he Nations were casting about for an answer to the wail which went up from the heart of the oppressed race for opportunity. And yet it was at best an impotent cry. For there has never lived a people worth writing about who have not shaped out a destiny for themselves, or carved out their own opportunity." With this political statement, Hayford begins his novel of African emancipation. Semi-autobiographical, it is the story of Kwamankra, a man who, like the author, traveled from Africa to London to become a lawyer. Through dialogue with his English friend Whitely, knowledge of historical and contemporary events in Africa, and his relationship with the lovely Mansa, Kwamankra comes to believe in full independence for his homeland and his people. With a beautifully designed cover and professionally typeset manuscript, this edition of J. E. Casely Hayford's Ethiopia Unbound: Studies in Race Emancipation is a classic of Ghanaian literature reimagined for modern readers.