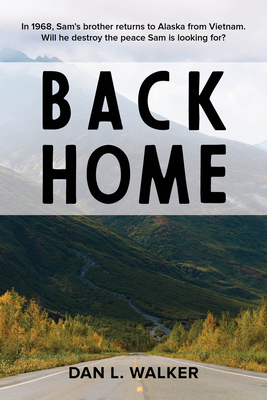 The sequel to Secondhand Summer continues Sam Barger's story with the homecoming of his older brother, now wounded from war, and the struggle for the two to understand and find each other again.

"Walker expertly explores how families live in the world at large, and how the ties that bind can be sorely tested by events far from home . . .] Walker is one of those young adult novel authors writing for adults as well as kids. Intended or not, Back Home is a commentary on our times as well. It's a reminder that battle fatigue comes from more than just warfare. It comes from living in a society at odds with itself."
--Anchorage Daily News

"Back Home will appeal to young adult readers, those interested in an Alaskan setting, and fans of bildungsroman stories. Recommended."
--Historical Novel Society

It's 1968, and like any other junior in high school, Sam Barger's just trying to get by in classes and find a part-time job at the local pizza parlor, maybe chat up the pretty girl who also works there. But when his Marine Corps brother Joe comes back from the Vietnam War, life at home changes. By day Joe struggles with alcoholism and by night he battles night terrors. Sam just wants normalcy again but doesn't know how to close the rift between the brothers, especially once he questions their country's involvement overseas.

Set in Southcentral Alaska in the 1960s, Back Home is a heartfelt story about the brothers and their struggles to come and understand each other. The book reveals the lasting effects of war on young people and draws parallels between a pivotal moment in history then to the contemporary wars and struggles today.