Ministers of a New Medium: Broadcasting Theology in the Radio Ministries of Fulton J. Sheen and Walter A. Maier (Hardcover) 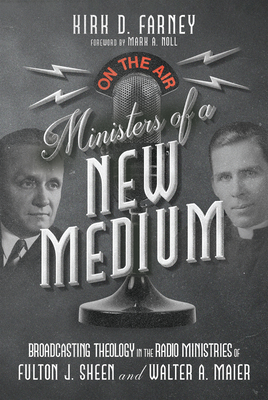 Ministers of a New Medium: Broadcasting Theology in the Radio Ministries of Fulton J. Sheen and Walter A. Maier (Hardcover)

By Kirk D. Farney, Mark a. Noll (Foreword by)

During the anxiety-laden period from the Great Depression through World War II to the Cold War, Americans found a welcome escape in the new medium of radio. Throughout radio's "Golden Age," religious broadcasting in particular contributed significantly to American culture. Yet its historic role often has been overlooked.

In Ministers of a New Medium, Kirk D. Farney explores the work of two groundbreaking leaders in religious broadcasting: Fulton J. Sheen and Walter A. Maier. These clergymen and professors--one a Catholic priest, the other a Lutheran minister--each led the way in combining substantive theology and emerging technology to spread the gospel over the airwaves. Through weekly nationwide broadcasts, Maier's The Lutheran Hour and Sheen's Catholic Hour attracted listeners across a spectrum of denominational and religious affiliations, establishing their hosts--and Christian radio itself--as cultural and religious forces to be reckoned with.

Farney examines how Sheen and Maier used their exceptional erudition, their sensitivity to the times, their powerful communication skills, and their unwavering Christian conviction, all for the purpose of calling the souls of listeners and the soul of a nation to repentance and godliness. Their combination of talents also brought their respective denominations, Roman Catholicism and Missouri Synod Lutheranism, from the periphery of the American religious landscape to a much greater level of recognition and acceptance. With careful attention to both the theological content and the cultural influence of these masters of a new medium, Farney's study sheds new light on the history of media and Christianity in the United States.