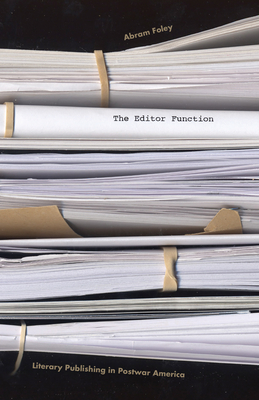 Michel Foucault famously theorized “the author function” in his 1969 essay “What Is an Author?” proposing that the existence of the author limits textual meaning. Abram Foley shows a similar critique at work in the labor of several postwar editors who sought to question and undo the corporate “editorial/industrial complex.” Marking an end to the powerful trope of the editor as gatekeeper, The Editor Function demonstrates how practices of editing and publishing constitute their own kinds of thought, calling on us to rethink what we read and how.

The Editor Function follows avant-garde American literary editors and the publishing practices they developed to compete against the postwar corporate consolidation of the publishing industry. Foley studies editing and publishing through archival readings and small press and literary journal publishing lists as unique sites for literary inquiry. Pairing histories and analyses of well- and lesser-known figures and publishing formations, from Cid Corman’s Origin and Nathaniel Mackey’s Hambone to Dalkey Archive Press and Semiotext(e), Foley offers the first in-depth engagement with major publishing initiatives in the postwar United States.

The Editor Function proposes that from the seemingly mundane tasks of these editors—routine editorial correspondence, line editing, list formation—emerge visions of new, better worlds and new textual and conceptual spaces for collective action.

Abram Foley is lecturer in literature and the creative industries at the University of Exeter. He has worked as editorial fellow for Dalkey Archive Press and is the founding editor of ASAP/J.

"The Editor Function fills an enormous void in the literary history of the postwar era. Abram Foley’s meticulous archival scholarship reveals the centrality—and the elusiveness—of editors and their practices. This is a must-read book for scholars of contemporary U.S. fiction and poetry, as well as for those interested in small-press publishing and avant-garde communities."—Paul Stephens, author of absence of clutter: minimal writing as art and literature

"If early modern Europe saw the ‘author function’ assume some of the social and legal roles traditionally played by publishers, Abram Foley shows us a more recent assumption of literary and artistic roles by editors. In the process, The Editor Function boldly extends the scope of literary history to the dynamic practices of publishing itself."—Craig Dworkin, author of Dictionary Poetics: Toward a Radical Lexicography