In Defense of Public Service: How 22 Million Government Workers Will Save our Republic (Paperback) 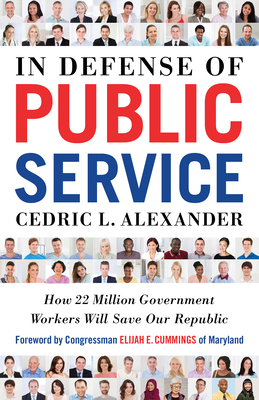 In Defense of Public Service: How 22 Million Government Workers Will Save our Republic (Paperback)


In Stock—Click for Locations
"Dr. Alexander . . . brings to this book an acute understanding of both why our cherished form of government--and those who serve us in the civil service--appears to be under such unrelenting attack and how we, as citizens, should and must respond."
--from the foreword by Congressman Elijah E. Cummings

When those we elect descend into partisan tribalism, criminal malfeasance, and emulation of foreign autocracies and oligarchies, Cedric Alexander says it is the unelected apolitical "fourth branch" of government--our nation's public servants, civil servants, and first responders--who must save the nation.

Alexander, a former deputy mayor, police chief, and CNN commentator, argues that these people do not constitute a nefarious "deep state" pursuing a hidden agenda. They are the analysts, scientists, lawyers, accountants, educators, consultants, enforcers of regulations, and first responders of every kind who keep the country running and its people safe. Alexander recounts the evolution of the professional civil service as an antidote to widespread cronyism, offers examples of how it has served as a bulwark against powerful corrupting influences, and describes the role it can play in bringing our badly divided society together. To the general public, many of these 22 million people remain invisible and their contributions hidden. But now is the time to make the invisible visible.
Cedric L. Alexander is the former deputy mayor of Rochester, NY and public safety director of DeKalb County, GA. He is also a professor of clinical psychology at the University of Rochester Medical Center and has served as president of the National Organization of Black Law Enforcement Executives, as well as on President Barack Obama's Task Force on 21st Century Policing. He is a frequent contributor to law enforcement coverage for CNN and spoke at TEDx Yale 2019. He is also the author of The New Guardians: Policing in America's Communities for the 21st Century.
"Over 30 years in a uniform in defense of our freedoms convinced me that soldiering was a good thing. Then I read Cedric Alexander’s book. I didn’t “defend” anything; I pursued liberty…supported by millions of selfless civil servants. They have my thanks."
—Major General James “Spider” Marks (US Army retired), President, The Marks Collaborative and CNN National Security contributor

"A gripping and passionate analysis. Thank you Cedric for telling the story of the deserving men and women of the public service. They deliver civilization to us every day."
—Patrick Malone, Director, Key Executive Leadership Programs, Department of Public Administration and Policy, American University

"Cedric Alexander provides an extraordinarily thoughtful and perceptive defense of public service and the dangers of hyper-partisanship from the unique point of view of a clinical psychologist, a police chief, and a leader in the field of community policing. This is an important book for all who care not just about policing in the 21st century but civility and good government in all its aspects."
—Barry Scheck, Co-Founder, Innocence Project, and professor of law, Benjamin N. Cardoza School of Law

"Cedric Alexander’s In Defense of Public Service should be required reading for everyday citizens as well as for anyone considering a life in the ‘Fourth Branch of our government.’  In a time of profound political division and deep skepticism about the so-called “Deep State”, this book sheds much needed light on the extraordinary contribution made by those unelected officials who actually keep our democracy running."
—Tony Goldwyn, Actor

"For almost 10 years I have had the privilege of teaching leadership to highly placed Federal managers. I am constantly inspired by their dedication, intelligence, and work ethic. In Defense of Public Service makes it clear why we all owe our civil servants a debt of gratitude and appreciation."
—Marilee Adams, Ph.D. bestselling author: Change Your Questions, Change Your Life: 12 Powerful Tools for Leadership, Coaching, and Life, Adjunct Professor, Key Executive Leadership Program, School of Public Affairs, American University