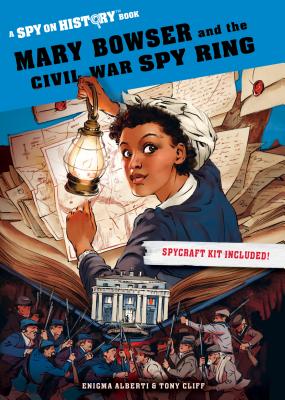 
Not On Our Shelves—Ships in 1-5 Days
Your Mission: Find Mary’s secret diary using spycraft stools to uncover hidden codes!

It’s a true story of bravery: Mary Bowser was an African American spy for the Union who worked as a maid in the mansion of Confederate Jefferson Davis. From hair-raising close calls when she almost gets caught to how she uses her photographic memory to “steal” top secret documents. Mary’s story reads like a gripping novel.

It’s a mystery to solve: There are clues embedded in the story’s text and illustrations, and Spycraft materials—including a replica Civil War cipher wheel—come in an envelope at the beginning of the book. Use both to discover what happened to Mary Bowser’s secret diary.

Enigma Alberti is the nom de plume of a secret cadre of authors who are each writing a book in the Spy on History series.
Tony Cliff is the author and artist behind the New York Times bestselling Delilah Dirk graphic novel series.