The Ultimate Biography of Earth: From the Big Bang to Today! (Paperback) 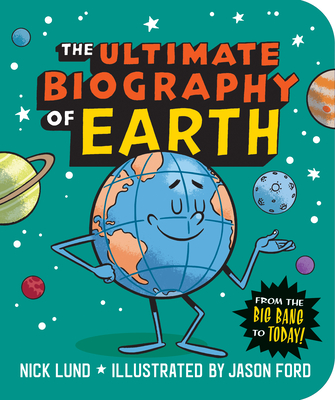 The Ultimate Biography of Earth: From the Big Bang to Today! (Paperback)


Not On Our Shelves—Ships in 1-5 Days
The natural history of Earth, told in biography form.

Told in a lively, illustrated biography form to deliver its cutting-edge science in the most compelling way, here is the story of Earth, from the chaotic Hadean eon with its huge oceans of molten rock to today’s Cenozoic era, aka the Age of Mammals (and that includes us humans). Learn about the Great Oxygenation Event. Meet some of the planet’s wildest life-forms, like Megatherium—a sloth as big as an elephant. Watch the continents separate, crash together, and reform. Get an eyewitness view of Earth’s major mass extinction events, including the asteroid strike that doomed the dinosaurs. And catch up on the basics, like why the sky is blue and how glaciers shape the land. It’s the ultimate biography of the best home in the galaxy. Fully illustrated and packed with facts!

Nick Lund is a nature writer who mostly writes silly things about birds on Twitter when he should be working. His
writing on birds and nature has appeared in Audubon magazine, National Parks magazine, Slate.com, the Washington Post, the Maine
Sportsman, the Portland Phoenix, Down East magazine, and others. He is a graduate of the University of Maine School of Law and has worked in federal energy policy in Washington, DC, before returning to Maine with his wife and son to work for Maine Audubon.

Jason Ford has worked for a wide range of clients and has become an author with the publication of the popular kids’ activity book—The Super Book for Superheroes and the follow-up title, The Monster Book of Zombies, Spooks and Ghouls. His third title, The Cosmic Book of Space, Aliens and Beyond, was released in autumn 2021.
"An entertaining and educational read, The Ultimate Biography of Earth is a delightful journey through the history of the universe with a focus on Earth and life. Highly recommend for curious children who are elementary and middle school aged."
— YABC

The Ultimate Biography of Earth is a treasure trove of fun facts and knowledge about our planet's history. Arranged in a clear, engaging chronological format, this book invites readers to see the Earth as a friend with a storied past—and a future worth protecting.
— Rosemary Mosco, best-selling science writer naturalist

By taking us back to the beginning of time, Nick Lund and Jason Ford guide us on an engaging and richly-illustrated adventure that will help kids not only understand the world around us, but our place in it. This book is so fun and contains so many engaging illustrations that most readers will not even realize how much they have learned about the world around us, and how much it has changed.
—David Steen, wildlife scientist and author