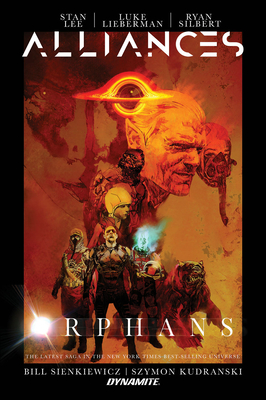 
Coming Soon—Pre-Order Now
A NEW SCIENCE FICTION EPIC FROM THE MIND OF STAN LEE From the mind of legendary comics creator Stan Lee, the architect of the Marvel Universe, comes Alliances: Orphans, a brand-new original graphic novel set in the New York Times best-selling Alliances universe, co-written by Lee with Luke Lieberman (Red Sonja) and Ryan Silbert (The Coldest Case). This cosmic adventure features fully painted artwork by Bill Sienkiewicz, who handles the prologue and cover, and Szymon Kudranski. Orphans blasts readers into the heart of our galaxy alongside William Ackerson, a man lost in space on a quest to find the source of his uncanny abilities. As gravity waves ripple across reality, warping time and space, he meets the Orphans. They are each the last of their kind, all their kin having been wiped outby the alien Hive: Little Boy, their giant childlike leader; Haze, a caustic creature of pure vapor; Rascal, a self-loathing zealot with dark secrets; and Critter, a being that's equal parts monster and puppy. This ragtag group find themselves in over their heads when their space-heist is hijacked. They have a stowaway with her own agenda: Samsi, the fearsome survivor of a civilization that once ruled the galaxy. Orphans is a fast-paced, intergalactic treasure hunt that explodes the Alliances universe into the cosmos. It introduces an extraordinary band of lone survivors, that must become a family to save the very fabric of reality.