The Chelsea Girls: A Novel (Paperback) 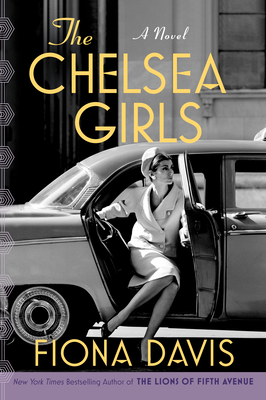 The Chelsea Girls: A Novel (Paperback)


In Stock—Click for Locations
The bright lights of the theater district, the glamour and danger of 1950s New York, and the wild scene at the iconic Chelsea Hotel come together in a dazzling new novel about a twenty-year friendship that will irrevocably change two women's lives—from the New York Times bestselling author of The Lions of Fifth Avenue.

From the dramatic redbrick facade to the sweeping staircase dripping with art, the Chelsea Hotel has long been New York City's creative oasis for the many artists, writers, musicians, actors, filmmakers, and poets who have called it home—a scene playwright Hazel Riley and actress Maxine Mead are determined to use to their advantage. Yet they soon discover that the greatest obstacle to putting up a show on Broadway has nothing to do with their art, and everything to do with politics. A Red Scare is sweeping across America, and Senator Joseph McCarthy has started a witch hunt for communists, with those in the entertainment industry in the crosshairs. As the pressure builds to name names, it is more than Hazel and Maxine's Broadway dreams that may suffer as they grapple with the terrible consequences, but also their livelihood, their friendship, and even their freedom.

Spanning from the 1940s to the 1960s, The Chelsea Girls deftly pulls back the curtain on the desperate political pressures of McCarthyism, the complicated bonds of female friendship, and the siren call of the uninhibited Chelsea Hotel.
Fiona Davis is the New York Times bestselling author of several novels, including The Dollhouse, The Address, The Masterpiece, The Chelsea Girls, The Lions of Fifth Avenue, and The Magnolia Palace. She lives in New York City and is a graduate of the College of William & Mary in Virginia and the Columbia Journalism School.
Praise for The Chelsea Girls

“Davis tells a very good story and deserves all the praise she won for her other books set in famous New York landmarks. . . . What finally emerges from the mix of detailed research and solid writing is a tale that is intricate and subtle, unpredictable and exciting.”—The Washington Post

“A satisfying read about the bonds between women.”—Brenda Janowitz, POPSUGAR

“Davis, who has given juicy supporting roles to New York landmarks in The Masterpiece and The Address, uses Chelsea as a metaphor for the grandeur that was within reach but spirals into a much darker place.”—Associated Press

“Another spectacular novel . . . Davis needs to be celebrated for this. Sure, she gets the history right and does a magnificent job of bringing the Chelsea’s special magic to life. Beyond that, she is an exquisite writer, who captures the essence of people and times.”—The Star-Ledger (Newark, NJ)

“The glitz and glamour of the Chelsea Hotel provides a perfect backdrop for Davis's story of friendship, ambition, and behind-the-scenes theatrical intrigue. Hazel and Maxine are complex characters struggling with conflicting questions of loyalty, love, and professional success in a turbulent time. Their story is both a sharp-eyed commentary on female friendship and a vivid glimpse into the life of a New York City icon.”—Shelf Awareness (starred review)

“Davis provides lots of historical details and some unforeseen twists. . . . [An] enjoyable read.”—Missourian

“The glamour of 1950s New York comes alive in this rich novel showcasing the history of the Chelsea Hotel, the theater district, and the twenty-year friendship of playwright Hazel Riley and actress Maxine Mead.”—Woman's World

“Davis's writing is rich in detail, enhanced by her quality research.”—Historical Novels Review

“[Fiona Davis] knows how to write about missed connections and deep dark secrets. Her gift is to transform an iconic building into a character in her story. . . . Fiona Davis tackles a new place and time with historical accuracy and a plot full of surprises.”—BookTrib

“Featuring vibrant, witty characters who not only weather but thrive in a dark period of American history, Davis’s tale of one friendship’s strength will stun and satisfy readers.”—Publishers Weekly

“This novel in three acts brings to vivid life the McCarthy era and its impact on the entertainment industry in a heartbreaking tale of the friendship of two brave women.”—Library Journal

“The Chelsea Girls [gives] readers the chance to live vicariously within these famed walls through its richly developed characters. This truly is a book—and backdrop—not to be missed.”—BookBub

“The theme of McCarthyism threads through this intricately woven novel, which highlights the politics of 1950s Broadway. . . . It’s a fascinating and at times heartbreaking look at an era in which lives were upended and careers derailed.”—The Christian Science Monitor

“A fascinating and wholly immersive celebration of friendship, love, loyalty, and courage during a turbulent and often underrepresented period in American history, The Chelsea Girls will delight. Davis brings her setting to life as she whisks readers away to the iconic Chelsea Hotel and the theater world during the McCarthy era. Richly detailed and transporting, historical fiction fans will love this one!”—Chanel Cleeton, New York Times bestselling author of When We Left Cuba

“The Chelsea Girls is an entirely delightful example of Fiona Davis’s inventive and winning approach to historical fiction. The dazzling allure of Broadway, the devastating consequences of McCarthyism, the delights of the legendary Chelsea Hotel, and above all the decades-long friendship of Hazel and Maxine—Davis weaves these narrative threads into a memorable, affecting, and marvelously entertaining novel.”—Jennifer Robson, internationally bestselling author of The Gown

“In her most impressive and ambitious novel yet, Davis has given us an expertly plotted and emotional tale of the aftermath of war, the insidious way that fear-mongering can divide us, and the unexpected ways that art brings us together. The Chelsea Girls is a masterfully crafted story of a bond between two women that is strong enough to overcome the heartache of war, the pressures of fame, and the gut-wrenching betrayal that accompanies dangerous secrets. This is one of the most powerful and moving stories of female friendship I have ever read.”—Lynda Cohen Loigman, author of The Wartime Sisters

“A dazzling story of loyalty, friendship, and betrayal in 1950s bohemian New York amid the danger of the Red Scare. It will leave readers wishing they could spend a night at the Chelsea Hotel for a taste of Broadway glamour and a well-shaken cocktail.”—Julia Kelly, award-winning author of The Light Over London

“The Chelsea Girls is the thoroughly engrossing story of an authentic and complex female friendship under the intense pressures of the Cold War. Replete with international secrets and theatrical triumphs, it sings with the nuances, trials, and celebrations of real friendship in the darkest of times. A must-read for you and your best friends!”—Kerri Maher, author of The Kennedy Debutante

“We all want friends like 'the Chelsea girls.' A winning mix of historic challenges and enduring ties between two remarkable women makes Fiona Davis’s latest novel a must-read.”—Stephanie Barron, author of That Churchill Woman

“A spellbinding tale of a decades-long friendship between two talented women, presented against a backdrop of political conspiracy, infused with the glamour of Hollywood and Broadway, and set in that ramshackle headquarters of New York bohemia, the iconic Chelsea Hotel. In The Chelsea Girls, the spirits of America’s mid-century arts scene rise up to frolic again. Brava!”—Sherill Tippins, author of Inside the Dream Palace: The Life and Times of New York’s Legendary Chelsea Hotel

“Davis has done us a service with a compelling historical novel that offers perspective to understand today’s polarized politics.”—Authorlink.com

“Through Davis’s rich historical detail and characters who light up the page, The Chelsea Girls is a novel that will delight readers and enchant historical fiction fans.”—Arizona Foothills Magazine

More Praise for Fiona Davis and Her Novels

“Fiona Davis in The Masterpiece continues a winning formula that showcases the stories behind New York City landmarks. . . . A hard-to-resist and timely reminder that for far too long the work done by women has been dismissed and disrespected.”—USA Today

“Fiona Davis delivers another stunning narrative.”—Us Weekly on The Masterpiece

“Davis has written another paean to a New York City landmark. Historical fiction fans will love the compelling dual narrators and time periods perfectly captured in this novel based on the history of one of the busiest transportation hubs in the world.”—Library Journal (starred review) on The Masterpiece

“A delicious tale of love, lies, and madness.”—People on The Address

“The Address is compelling, historically minded fiction with unexpected—and entertaining—twists and turns. . . . The novel delights.”—Ms.

“Lively and detail rich—set against the backdrop of NYC's infamous Dakota building—with a thread of mystery that makes it easy to enjoy, hard to put down.”—Family Circle on The Address

“Spanning over one hundred years, Fiona Davis's mystery is packed with deceit.”—US Weekly on The Address

“Rich both in twists and period detail, this tale of big-city ambition is impossible to put down.”—People on The Dollhouse

“The Dollhouse is a thrilling peek through a window into another world—one that readers will savor for a long time.”—Associated Press

“An ode to old New York that will have you yelling for more seasons of Mad Men.”—New York Post on The Dollhouse