We Regret to Inform You (Paperback) 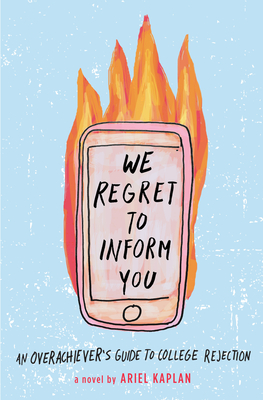 We Regret to Inform You (Paperback)


In Stock—Click for Locations
How far would you go to get into the right college?... Fans of Becky Albertalli will appreciate this sharp-witted, timely novel about an overachiever who stumbles into the middle of a college admissions scandal.

Mischa Abramavicius is a walking, talking, top-scoring, perfectly well-rounded college application in human form. So when she's rejected not only by the Ivies, but also by her loathsome safety school, she is shocked and devastated. All the sacrifices her mother made to send her to prep school, the late nights cramming for tests, the blatantly résumé-padding extracurriculars (read: Students for Sober Driving), the feelings of burnout . . . all that for nothing.
As Mischa grapples with the prospect of an increasingly uncertain future, she questions how this could have happened in the first place. Is it possible that her transcript was hacked? With the help of her best friend and sometimes crush, Nate, and a group of eccentric techies known as "The Ophelia Syndicate," Mischa launches an investigation that will shake the quiet community of Blanchard Prep to its stately brick foundations.
In her sophomore novel, A. E. Kaplan cranks the humor to full blast and takes a serious look at the extreme pressure of college admissions.

"A well-written, intricately plotted, and sympathetic portrayal of the pressures that some elite college-bound kids experience during senior year." --Kirkus Reviews, starred review

Ariel Kaplan was born in California and raised in Virginia, where she lives to this day. She managed to survive the college-admissions process twice in order to receive her BA from the College of William and Mary and her MLS from Florida State University. Nevertheless, she continues to have dreams in which she did not graduate and must repeat school from the third grade on as an adult.

Ariel's books, Grendel's Guide to Love and War, We Regret to Inform You, and We Are the Perfect Girl, have received seven starred reviews among them and been named to the Indie Next List and the ALA-YALSA Best Fiction for Young Adults list among other honors.

Visit her at aekaplan.com.
Follow her on Twitter at @ae_kaplan.
"A well-written, intricately plotted, and sympathetic portrayal of the pressures that some elite college-bound kids experience during senior year. "—Kirkus Reviews, starred review

"Any high-achieving teen will see themselves reflected in Mischa."—VOYA, starred review

"This story of self-discovery is full of humor and heart, and will immediately transport you back to senior year." —Hello Giggles

"Ariel Kaplan's We Regret to Inform You is a knowing, enjoyable tale of a teenager who learns first-hand that college admissions isn't always as fair or merit-based as universities would have us believe—and that a painful, unwarranted rejection can become a gateway to adulthood and self-discovery." —Daniel Golden, Pulitzer Prize-winning author of The Price of Admission