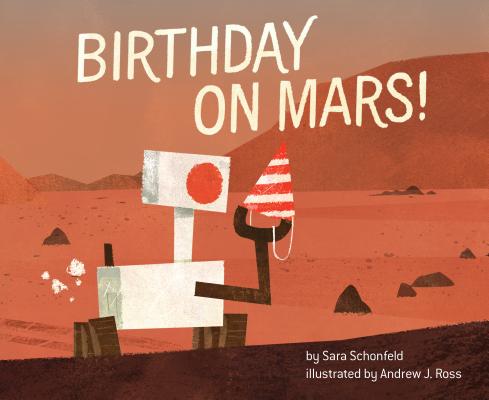 
In Stock—Click for Locations
Even robots have birthdays! Celebrate Curiosity and wish happy birthday to one of NASA's most famous Mars rovers in this beautiful picture book!

"The book is adorable. . . a celebration of curiosity and exploration." - GeekDad.com

Mars is our closest neighbor, and a little robot named Curiosity is investigating the planet for us. Join for a tour of the place this rover calls home. Get to know Mars through eye-catching illustrations of an alien landscape and the adorable robot in charge of exploring it all. And this rover's birthday is a perfect time to celebrate curiosity.

For nerdy parents, fans of space, or those who are just curious, relive the moment when the Curiosity rover sang itself happy birthday in 2013 after one year on Mars.
Sara Schonfeld is an editor, author, and all-around nerd. She lives in New York City.

Andrew J. Ross is a Canadian storyboard artist and illustrator who has spent time working in the U.S. on animated films for DreamWorks Animation, Sony Animation, Illumination Entertainment, and Blue Sky Studios. He's best known for his work on Kung Fu Panda 3, Penguins of Madagascar, and Captain Underpants. Andrew currently lives in Toronto with his wife, Sheryl, and cactus, Peter.
"Greetings from Curiosity, roving the red planet since 2012!

With a wave of its arm, Curiosity introduces itself and the barren Martian landscape (“No humans have ever been here before. Isn’t that cool?”), then, while sending a celebratory selfie back to friends on Earth, sings “Happy birthday to me”—a ditty it actually was programmed to hum, though just on the first anniversary of its landing. In his blocky painted illustrations, Ross sends the excitable rover (“Oops—I made a dust cloud! I guess I should slow down”) trundling through a Martian sunset while extolling the virtue for which it was named, then switches planetary settings to show some of Curiosity’s “billions of friends” (or a diverse crowd of them, at least) gathered in a science museum for the party. With its boxlike, six-wheeled body, single arm, and red-lensed camera on a movable stalk, the rover manages to project lots of personality. For readers who are still, well, curious, Schonfeld closes with a page of Mars and Mars rover facts, plus the news that a new rover will be on its way in the near future. With its diminutive trim, the book even recalls a birthday card.

A sweet interplanetary message from a narrator who sounds for all the world like a younger version of the one in Markus Motum’s more seriously detailed Curiosity (2018). (Picture book. 5-7)"

"Marissa Czyz is the voice of the Mars rover CURIOSITY, ambling across the surface of the red planet. She shares information about how it spends its days and even sings its "Happy Birthday to Me" song. Czyz is an unobtrusive narrator, letting the novelty of the birthday celebrant steal the show. Specifically, listeners hear how it celebrates its birthday—stirring up a dust cloud in its hurry to send a picture back to Earth and to share conversations with Earth. Czyz adds emphasis to the notion that humans should be as curious as CURIOSITY is. Additional facts about Mars—home to rovers since 1997—and a shout-out to the newest rover, INSIGHT, which will examine Mars below the surface, complete the production."