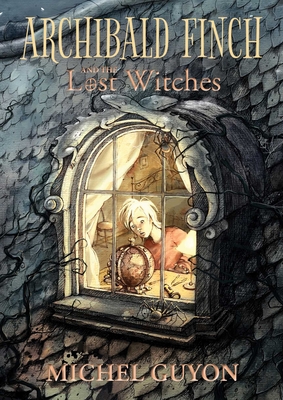 This is book number 1 in the Archibald Finch series.

History, magic, and adventure collide in this riveting middle-grade fantasy novel about an unusual boy who unlocks an ancient relic—and, with it, a forgotten world. Befriended by a band of young witches, Archibald Finch must quickly adapt to survive in Lemurea, where a battle born in the Middle Ages is still unfolding . . .

Archibald is a risk-averse boy with quirks that earn him plenty of eye-rolls, especially from his older sister, Hailee. Things get worse when his parents move the family from London to his grandmother’s creepy manor in the English countryside. Now he has to deal with hairless dolls in the library, weird stone creatures on the roof, and a spooky forest at the edge of the backyard. But these turn out to be the least of Archibald's problems . . .

One day, as he's exploring the cavernous house, he finds a curious globe that whisks him away to a secret world, hidden for 500 years. Archibald finds himself on a thrilling adventure full of medieval magic, mysterious symbols, and the strangest beasts, while Hailee—who witnessed her brother’s disappearance—embarks on a daring quest to find him.
Michel Guyon was born in France, in a small medieval town perched on a rock, surrounded by high walls, with the remains of an ancient fortress at its heart. That's where the author had his first brush with ancient myths, puzzling legends, and dark tales of the Middle Ages. Since then, Michel has learned a thing or two about mining for clues and connecting the dots, mainly as an investigative journalist for newspapers and magazines. While his childhood fed his fertile imagination, his travels as a reporter, from Bosnia to Afghanistan, were crucial in shaping his view of the world.