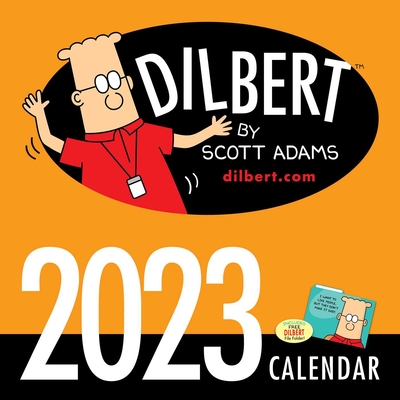 
Special Order—Subject to Availability
(This book cannot be returned.)
If you’ve ever worked in an office, you’re sure to laugh at the antics of the workplace crew in Dilbert, the popular comic strip known for its satirical take on life in a cubicle.

Join Dilbert, Wally, Alice, and the rest of the gang for another year of office shenanigans with the Dilbert 2023 Wall Calendar, based on the most shared comic strip in the world. Each monthly spread of the wall calendar features a bright, graphic image of a favorite Dilbert character and a stand-alone quote, plus the strip where the quote appeared. A bonus Dogbert file folder is included with the calendar.
What started as a doodle has turned Scott Adams into a superstar of the cartoon world. Dilbert debuted on the comics page in 1989, while Adams was in the tech department at Pacific Bell. Adams continued to work at Pacific Bell until he was voluntarily downsized in 1995. He has lived in the San Francisco Bay Area since 1979.