The Far Side® 2023 Off-the-Wall Calendar (Calendar) 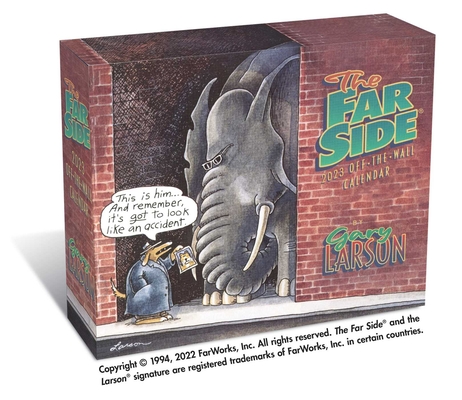 The Far Side® 2023 Off-the-Wall Calendar (Calendar)


On Our Shelves Now at:
(This book cannot be returned.)
Make 2023 a stellar year with another bestselling The Far Side® calendar from comedic genius, Gary Larson. This revised edition of The Far Side® 1995 Off-The-Wall Calendar brings you 365 days of subversively hilarious and ageless takes on our crazy universe. Need we say more?

Behold! Like the 17-year cicada (give or take a couple of years), The Far Side®1995 Off-The-Wall Calendar has emerged from its lair sporting a new skin: The Far Side®2023 Off-The-Wall Calendar. Our field experts assured us that this rare event—the perfect alignment of two very removed calendars, which has something to do with the earth’s orbit around the sun, and the formation of celestial bodies known as “cow stars”—is something quite unique, and most worthy of our capture and release. Behold! (We think this warranted a second Behold!) The Far Side®2023 Off-The-Wall Calendar has officially taken flight. Let the air once again be filled with the buzz of laughter, gasps, and “huh?”

Features include:
Gary Larson was born August 14, 1950, in Tacoma, Washington. Always drawn to nature, he and his older brother spent much of their youth exploring the woods and swamps of the Pacific Northwest, and the tidelands and waters of Puget Sound.

Though he loved to draw as a child, Larson didn’t formally study art, nor did he consider being a cartoonist. He graduated in 1972 from Washington State University with a degree in communications but took many classes in the sciences. In 1990, Larson received the Regents’ Distinguished Alumnus Award and was the centennial commencement speaker. His talk was titled “The Importance of Being Weird.” His interest in science was a frequent topic in many of The Far Side® cartoons, which he created for fifteen years, from January 1, 1980, to January 1, 1995.

In 1994, Larson debuted a twenty-two-minute version of his first animated film, Gary Larson’s Tales From The Far Side®, as a Halloween special on CBS television, and it quickly became a cult favorite. The film won the Grand Prix at the 1995 Annecy International Animated Film Festival in France. That film and its sequel, Gary Larson’s Tales From The Far Side® II, were selected for numerous international film festivals, including Venice, Brussels, and Telluride, and were broadcast in various foreign countries. Both were produced with traditional cel animation, completely hand-inked and painted.

Music has also been an important part of Larson’s life. He started playing the guitar at an early age, moved to the banjo for a few years, and then ultimately returned to the guitar. Since retiring from daily newspaper syndication, Larson has focused his creative efforts on the guitar and his passion for jazz.

At the end of its run, The Far Side® appeared in nearly two thousand newspapers. It in turn spawned twenty-three The Far Side® books, including sixteen collections, five anthologies, and two retrospectives, twenty-two of which appeared on the New York Times Best Sellers list. Over the years, more than forty-one million books and seventy-nine million calendars have been sold, and The Far Side® has been translated into more than seventeen languages.

As for his inspiration, Larson often cites his family’s “morbid sense of humor” growing up and how his older brother loved to scare him whenever he got the chance. He was also once quoted as saying, “You know those little snow globes that you shake up? I always thought my brain was sort of like that. You know, where you just give it a shake and watch what comes out and shake it again.” He attributes much of his success to the caffeine in the coffee he drinks daily.