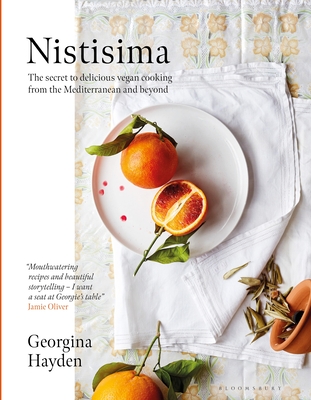 120 vegan recipes from the Mediterranean, Middle East, and Eastern Europe that have stood the test of time, from award-winning food writer Georgina Hayden.

In this beautiful cookbook filled with stories, tips, tricks, and striking four-color photography, Georgina Hayden looks to Greece, Cyprus, and beyond to share delicious, almost entirely natural dishes. Whether you're vegan, vegetarian, or simply interested in plant-based eating, you will enjoy these flavor-packed foods which draw from the tradition of nistisima, a Greek word that translates to Lenten, or fasting--often used in relation to animal products. Georgian Hayden explores the history and culture of nistisima to introduce home cooks to this new kind of vegan cooking which has been honed over centuries of religious practice. From bread to salads, dips, and pickles, to harvest cooking with seasonal vegetables, to cakes, puddings, and sweets, Nistisima features recipes for smokey red pepper and walnut flatbread; roast tomato, orzo, and rocket salad with roasted garlic dressing; fresh coriander and olive potatoes; broadbean falafel; and more nutritious, simple dishes more centered around Earth's bounty.

A must-have for every plant-focused cookbook shelf, Nistisima is an exciting approach to modern, environmentally equitable vegan cooking influenced by a celebrated tradition.

Georgina Hayden is a cook, food writer and stylist from north London. She writes for publications such as The Telegraph, Delicious Magazine and Observer Food Monthly, and in 2021 she won the Fortnum & Mason Best Cookery Writer Award for her work in Waitrose Food magazine. She has appeared on Radio 4's Woman's Hour, and regularly appears on Channel 4's Sunday Brunch and BBC1's Saturday Kitchen.


Growing up above her grandparents' Greek Cypriot taverna, Georgina developed a love of cooking and storytelling through the recipes passed
down to her. She started her career as food assistant, working at various food magazines, and then went on to join Jamie Oliver's food team where she worked for 12 years. There she did everything from styling, developing and writing recipes for books and TV, magazines and campaigns. Her first book, Stirring Slowly, was published in 2016, followed by the book about the food of her Cypriot family, Taverna, in 2019. Nistisima is her
third book.


Georgina documents her recipes and food travels on her Instagram page: @georgiepuddingnpie.

“Exceptional . . . Conceived to adhere to nistisima, the Greek Orthodox church's fasting tradition, the dishes abstain from using any animal products, but feel far from restrictive. . . . The result is a stellar collection that will satisfy religious observers and agnostics alike.” —Publishers Weekly (starred review)

“This book is the sunny window that everyone needs: open it to flood your kitchen with Mediterranean sun, delicious food and great stories. Georgina takes these ancient traditions and fits them to our modern kitchens with impeccable style and flare; surely lent has never tasted so good.” —Itamar Srulovic, Honey & Co

“There's so much to love and to learn in Georgina's glorious Nistisima. It's really worth fasting to eat like this.” —Claudia Roden