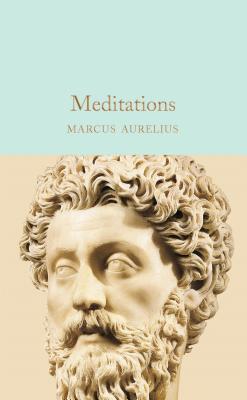 The Meditations are a set of personal reflections by Marcus Aurelius. He writes about the vicissitudes of his own life and explores how to live wisely and virtuously in an unpredictable world.

Part of the Macmillan Collector’s Library; a series of stunning, clothbound, pocket sized classics with gold foiled edges and ribbon markers. These beautiful books make perfect gifts or a treat for any book lover. This edition is translated by A. S. L. Farquharson and features an introduction by John Sellars.

Marcus Aurelius was a follower of the Stoic tradition of philosophy, and one of its finest advocates, both in the clarity of his writing and in the uprightness of his life. The aphorisms show how for him, as perhaps for us all, the answer to life lies in keeping a calm and rational mind, and in refusing to be cast down or alarmed by things over which we have no control.

Marcus Aurelius Antoninus was born in 121 AD. He is believed to have been a bookish young boy who studied with a number of Stoic philosophers. He had a reputation for virtue from a young age and was subsequently adopted into the imperial family. This led to him becoming Emperor of Rome, a post he held from 161 until his death in 180.