We Need to Talk About Putin: How the West Gets Him Wrong (Paperback) 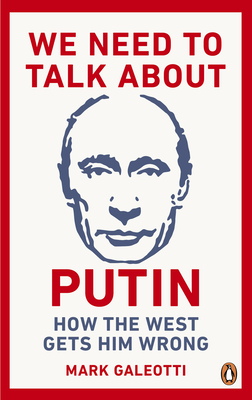 We Need to Talk About Putin: How the West Gets Him Wrong (Paperback)


Special Order—Subject to Availability
Meet the world's most dangerous man. Who is the real Vladimir Putin? What does he want? And what will he do next? Despite the millions of words written on Putin's Russia, the West still fails to truly understand one of the world's most powerful politicians, whose influence spans the globe and whose networks of power reach into the very heart of our daily lives. This essential primer uncovers the man behind the myth, addressing the key misperceptions of Putin and explaining how we can decipher his motivations and next moves. From Putin’s early life in the KGB and his real relationship with the U.S. to his vision for the future of Russia—and the world—this book draws on new Russian sources and explosive unpublished accounts to give unparalleled insight into the man at the heart of global politics.

Professor Mark Galeotti is one of the foremost Russia-watchers today, who travels there regularly to teach, lecture, talk to his contacts, and generally watch the unfolding story of the Putin era. Based in London, he is Senior Non-Resident Fellow at the Institute of International Relations Prague, having previously headed its Centre for European Security, and was before then Professor of Global Affairs at NYU. A prolific author on Russia and security affairs, he frequently acts as consultant to various government, commercial and law-enforcement agencies.
"Illuminating and gripping . . . Galeotti has spent decades studying the subject." —Misha Glenny, author, McMafia


"This book could not be more relevant. . . brilliant, gripping, astonishingly rich. . . filled with flamboyant gangsters, devious rackets, vicious hits, secret policemen, Kremlin leaders and criminal slang, at once a true-crime chronicle, a work of scholarship, an anthropological study, a political history of the fused underworld and upper echelons of Russian power —and essential reading." —Simon Sebag Montefiore, author, Stalin: The Court of the Red Tsar