The Rise and Fall of Senator Joe McCarthy (MP3 CD) 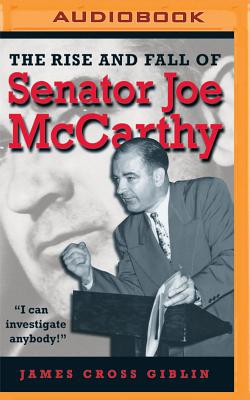 The Rise and Fall of Senator Joe McCarthy (MP3 CD)


Special Order—Subject to Availability
The man who spoke these words was Senator Joseph ("call me Joe") McCarthy, Republican from Wisconsin, and when he said them, they were very close to true. In the fearful and unsettled cold war climate of the early 1950s, McCarthy came up with what many seized on as a simple solution to the nation's problems: Search out the Communists in government, education, entertainment, and the armed forces, and get rid of them. The bullying and dishonest tactics McCarthy used in conducting his investigations of suspected Communists still bear his name: McCarthyism. The compelling story of Senator Joe McCarthy -- who he was, how he achieved a position of almost unlimited power, and how the American system of government ultimately brought him down -- is told in this book. With a large cast of characters and with the major national and international events of the time as backdrop, the biography brings clarity, drama, and insight to the life and career of a political figure as controversial today as he was in his own time.