The Paralogs of Phileas Fogg: Columbiad, the Gem of the Ocean! (Paperback) 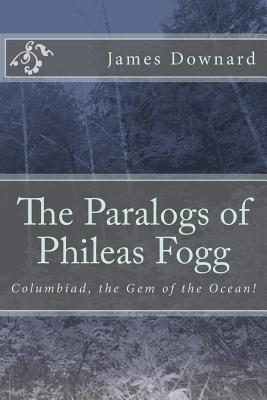 The Paralogs of Phileas Fogg: Columbiad, the Gem of the Ocean! (Paperback)


Not On Our Shelves—Ships in 1-5 Days
(This book cannot be returned.)
What were Phileas Fogg (a fellow of most mysterious background) and his new valet Jean Passepartout (who claimed he came from France) REALLY up to when they suddenly went around the world in 80 days? Much more than a wager, as it turns out, in this exciting new steampunk mystery adventure from James Downard. From submarines and airships battling on the high seas, to electric weapons and technology even more astonishing and threatening, Phileas Fogg and his allies play for the highest of stakes in a battle of wits and wills to keep envious forces from obtaining the secrets of atomic energy, and perhaps even altering the very course of history. Along the way, in India, Mr. Fogg meets his match and mate in Aouda, the even more brilliant and formidable sister of Captain Nemo, while gathering as unexpected a cast of associates as any in fiction. There's the elderly (but far from passe) detective Auguste Dupin, showing he's lost none of his skills in the years since the troubled American Mr. Poe wrote of his exploits in the Rue Morgue. Then there is the reclusive ex-slave Thomasina Maker, whose extraordinary inventions prove essential to their undertaking, even as her indomitable spirit stands up for justice and an unfettered imagination in a world so rife with prejudice and fear. And what of that audacious news correspondent Michel Ardan, friend of the American Mr. Barbicane who planned to fly to the Moon, until Passepartout and Fogg changed their plans? Is Ardan working to an altogether different agenda? And will he ever need to use that little pistol he carries in his pocket? The world of 1872 that Jules Verne teased us with is brought to life anew in all its vivid detail as Phileas Fogg races around the world, by ship and train--and not a few other conveyances of most unprecedented character. Chased by, and chasing after, people who would learn too late the dangers of knowing too little. Fortunately for our heroes, Phileas Fogg carries his Watch, and Passepartout has his Comb.