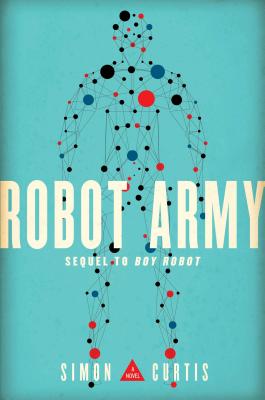 
Not Yet Published—Pre-Order Now
Isaak continues to fight against the secret government organization formed to eradicate Robots like him in this action-packed sequel to Boy Robot!

“Isaak, the technology used to create the Robots isn’t just a weapon. It’s a virus. The deadliest virus humanity has ever faced.”

Burdened with the knowledge that the Robots’ survival might mean the end of the human race, Isaak returns to California to find what remains of The Underground. There he begins his search for Evelyn, one of their creators responsible for devising a technology that might save them, called “The Heart.”

Before Isaak can formulate a plan, however, he and the remaining members of The Underground are deceived by one of their own and suddenly find the Robots’ existence revealed to the world. But the government has a revelation of their own in response: the head of the SHRF, a man nicknamed “The Colonel,” has been building a Robot army of his own. An army who will obey and fight for their country.

Now Isaak must decide whether they will join or fight, and with whispers of a new technology called “The Mind,” will they even have a choice?

In the sequel to Boy Robot, Simon Curtis takes the Robots’ brutal fight for acceptance and survival to the global stage, and as the world prepares for war in the wake of their existence, Isaak must face an even greater battle: destiny vs. free will.
Simon Curtis was born in Michigan and raised in Tulsa, Oklahoma. He was diagnosed with leukemia at age ten and began performing in musical theater and opera that same year. He was the happiest bald, chemotherapy-addled cancer patient ever seen on the stage. At eighteen, he moved to Los Angeles. After various roles on Nickelodeon and Disney Channel, Simon left acting to pursue music, releasing his first album, 8bit Heart, as a free download, followed by his second album, RA, which landed at number twenty on Billboard’s Dance & Electronic Albums chart. Simon continues to write and release music as an independent recording artist. Above all else, he strives to inspire hope in young people.