Jazz Owls: A Novel of the Zoot Suit Riots (Hardcover) 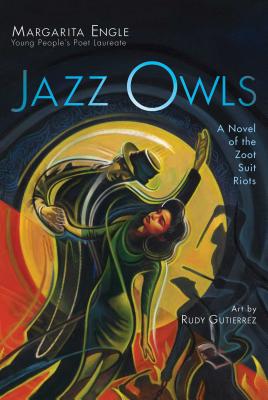 Jazz Owls: A Novel of the Zoot Suit Riots (Hardcover)


Not On Our Shelves—Ships in 1-5 Days
From the Young People’s Poet Laureate Margarita Engle comes a searing novel in verse about the Zoot Suit Riots of 1943.

Thousands of young Navy sailors are pouring into Los Angeles on their way to the front lines of World War II. They are teenagers, scared, longing to feel alive before they have to face the horrors of battle. Hot jazz music spiced with cool salsa rhythms calls them to dance with the local Mexican American girls, who jitterbug all night before working all day in the canneries. Proud to do their part for the war effort, these Jazz Owl girls are happy to dance with the sailors—until the blazing summer night when racial violence leads to murder.

Suddenly the young white sailors are attacking these girls’ brothers and boyfriends. The cool, loose zoot suits they wear are supposedly the reason for the violence—when in reality these boys are viciously beaten and arrested simply because of the color of their skin.

In soaring images and powerful poems, this is the breathtaking story of what became known as the Zoot Suit Riots as only Margarita Engle could tell it.
Margarita Engle is the Cuban American author of many books including the verse novels Rima’s Rebellion; Your Heart, My Sky; With a Star in My Hand; The Surrender Tree, a Newbery Honor winner; and The Lightning Dreamer. Her verse memoirs include Soaring Earth and Enchanted Air, which received the Pura Belpré Award, a Walter Dean Myers Award Honor, and was a finalist for the YALSA Award for Excellence in Nonfiction, among others. Her picture books include Drum Dream Girl, Dancing Hands, and The Flying Girl. Visit her at MargaritaEngle.com.

Rudy Gutierrez is an award-winning illustrator whose works have earned him a Pura Belpré Honor, Américas Book Award, Africana Book Award, and a New York Book Award. He was born in the Bronx and now lives in New Jersey.
“A riveting, wonderfully researched novel.”
— Matt de la Peña, Newbery Winner

*“Readers will be cheering for the jazz owls to be able to not only dance, but to overcome racism. A quick read perfect for history buffs, dance enthusiasts, poets, and just about anyone looking for a great story.”
— School Library Journal, Starred Review

“A fast-paced narrative . . . Engle pieces together a volatile episode in history, filled with love, loss, and coming-of-age stories within a Mexican American family at a time of racial strife.”
— Booklist

“Offers a look at a seldom-represented moment in U.S. history. . . . The free verse brings us inside the characters’ heads, allowing us to feel Ray’s indignation at racial violence and to understand Lorena’s politicization as she connects her experiences of injustice to organizing for better working conditions.”
— The Horn Book

“Voices of the siblings and their elders are convincingly realized . . . Gutierrez’s black and white artwork graces chapter breaks with elegantly fluid interpretations of events.”
— BCCB