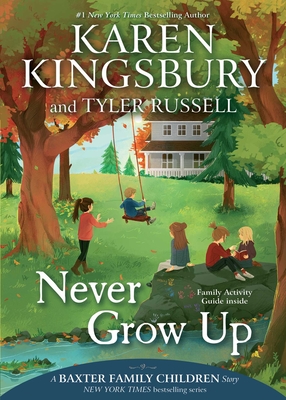 
On Our Shelves Now at:
In the third book in Karen Kingsbury and Tyler Russell’s beloved series about the Baxter children, Ashley and Kari Baxter struggle with what it means to grow up.

When Kari Baxter is assigned an essay about what she wants to be when she grows up, her mind goes blank. She doesn’t want to grow up; she wants everything to stay just like it is. But Kari comes to realize that while making time stand still isn’t possible, she can enjoy every moment with her best family ever.

Meanwhile, Ashley Baxter feels the same way. She is worried her siblings are growing up too fast. When she wins the role of Wendy in her school performance of Peter Pan, Ashley gets an idea. Maybe she and her siblings can pledge to never grow up at all!

This third story in the Baxter Family Children series shares the reassuring message that even though growing up can be tough, family and friends are always there with support and love.
Karen Kingsbury, #1 New York Times bestselling novelist, is America’s favorite inspirational storyteller, with more than twenty-five million copies of her award-winning books in print. Her last dozen titles have topped bestseller lists and many of her novels are under development as major motion pictures. Her Baxter Family books were developed into a TV series. Karen is also an adjunct professor of writing at Liberty University. She and her husband, Donald, live in Tennessee near their children and grandchildren.

Olivia Chin Mueller grew up in Chester, Connecticut, and now lives in Los Angeles, California. She attended the Rhode Island School of Design and graduated with a BFA in 2014. Besides illustrating, Olivia loves playing with her cats, raising silk moths, and also enjoys sewing and felting plush animals of her own.