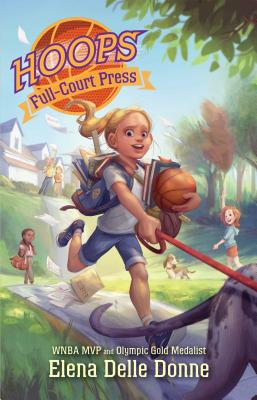 This is book number 2 in the Hoops series.

From 2015 WNBA MVP, 2016 Olympic gold medalist, and global ambassador to the Special Olympics Elena Delle Donne comes the second novel in a brand-new middle grade series with as much heart as there is game.

When the basketball team is invited to have a service day at the school-affiliated after-school program, Elle falls in love with working with kids with special needs. So she begins to volunteer on two days a week when she doesn’t have practice and makes new friends there.

Now, Elle finds herself juggling her new passion, basketball obligations, and schoolwork. But when her grades start to slip, she’s going to have to make a tough decision.

Can Elle really do it all? Or will she find herself being pulled in too many directions?
Elena Delle Donne has been a professional women’s basketball player since 2013, when she was selected by the Chicago Sky second overall in the WNBA draft. She was the 2015 WNBA MVP and won the gold medal with the USA’s women’s basketball team in the 2016 Olympics. She is the global ambassador for the Special Olympics and became the first national ambassador for the Lyme Research Alliance. Elena also plays host to De11e Donne Academy, a basketball camp that runs throughout the year, where she mentors and coaches girls ages seven to eighteen. She now plays for the Washington, DC, Mystics.