My Name Is Bana (Hardcover) 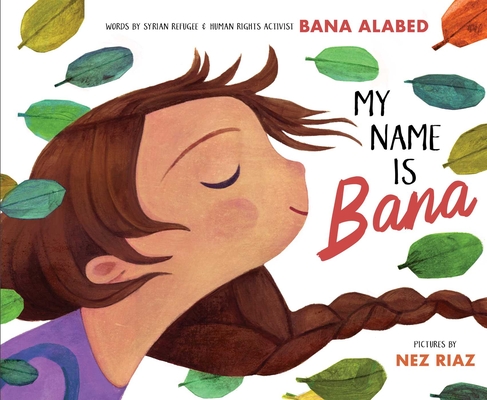 My Name Is Bana (Hardcover)


In Stock—Click for Locations
A poignant picture book memoir from Bana Alabed, the seven-year-old Syrian girl from Aleppo whose messages to the world have turned her into a global symbol and advocate for refugee rights.

When seven-year-old Bana Alabed took to Twitter to describe the horrors she and her family were experiencing in war-torn Syria, her heartrending messages touched the world and gave a voice to millions of innocent children.

Written in Bana’s own words, this picture book offers a uniquely intimate child’s perspective on one of the biggest humanitarian crises in history. Bana has lost her best friend, her school, her home, and her homeland. But she has not lost her hope—for herself and for other children around the world who are victims and refugees of war and deserve better lives.
Bana Alabed, born in 2009 in Aleppo, Syria, is known worldwide for her tweets during the siege of the city in 2016 and for her subsequent calls for peace and an end to all global conflict. Her tweets have earned her legions of admirers around the world by giving a remarkable insight into the daily horrors of life in the city, including airstrikes, hunger, and the prospect of her family’s death. In December 2016, Bana and her family were safely evacuated from Aleppo to Turkey. When she grows up, Bana would like to become a teacher, like her mother. Her father is a lawyer, and she has two younger brothers, Noor and Mohamed. She wrote Dear World and My Name Is Bana.

Nez Riaz is a Pakistani/Palestinian illustrator based in Boston. She enjoys storytelling, pineapple pizza, and monkeys.