Who Let the Frogs Out? (Hardy Boys Clue Book #9) (Hardcover) 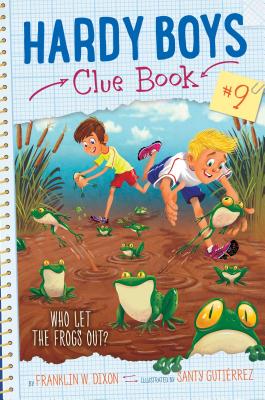 Who Let the Frogs Out? (Hardy Boys Clue Book #9) (Hardcover)

This is book number 9 in the Hardy Boys Clue Book series.

Detective brothers Frank and Joe must solve a muddy mystery in the ninth book in the interactive Hardy Boys Clue Book series.

Bayport Elementary is hosting a Mud Run to celebrate spring! A particularly muddy part of the town’s park will be set aside for the race and Coach Lambert has even managed to make more mud by using the park’s hoses and shovels. Frank and Joe can’t wait to splash through the muck.

But on the day of the race, the runners are stopped in their tracks by croaking, blurping bullfrogs! Lots of people in the town had been annoyed that the park was being taken over by a bunch of muddy kids. Could someone have sabotaged the race with buckets of frogs?
Franklin W. Dixon is the author of the ever-popular Hardy Boys books.