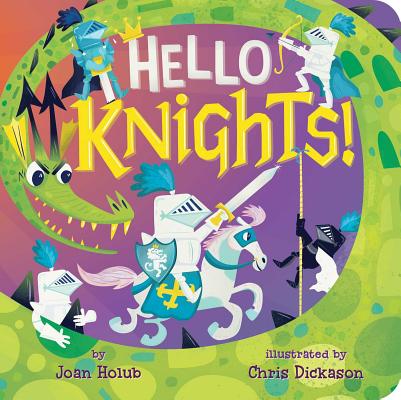 Perfect for reading out loud, Joan Holub’s hilarious text and Chris Dickason’s lively illustrations will have little ones huff-puff laughing as the knights and dragons run up and down the castle wall.

A clever, interactive approach to first concepts, this board book series also introduces important “next-step” concepts like opposites in a hilariously engaging way.
Joan Holub has authored and/or illustrated over 140 children’s books, including the Goddess Girls series, the Heroes in Training series, the New York Times bestselling picture book Mighty Dads (illustrated by James Dean), and Little Red Writing (illustrated by Melissa Sweet). She lives in North Carolina and is online at JoanHolub.com.

Chris Dickason grew up somewhere between the canals of southwest France, the Swiss mountains, England’s estuaries and amusement arcades. The youngest of four children (the ‘little brother’ role he still embraces in adulthood). Chris spent the majority of his education drawing on his friends’ schoolbooks and was brought up on a diet of Tom & Jerry, Swiss chocolates, cheap fizzy pop and French sunshine.