The Green Children of Woolpit (Hardcover) 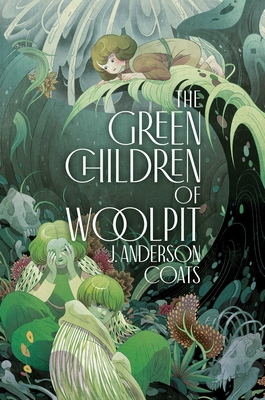 The Green Children of Woolpit (Hardcover)


Special Order—Subject to Availability
An eerie, spine-tingling fantasy about a young girl who discovers two otherworldly children—and an ancient bargain that threatens to destroy them all.

It is the autumn of 1160, and twelve-year-old Agnes is helping with the harvest when she hears a frightened voice calling from the nearby woods. When she goes to investigate, Agnes can’t believe what she sees. There, at the bottom of the deep wolf traps, are two children. They are shouting in a language no one understands—and their skin is bright green.

Agnes soon discovers that these are no ordinary children; in fact, they aren’t even human. They are of the Fair Folk, and they are here to take Agnes home to their world. Trusting that the Fair Folk cannot lie, Agnes agrees to venture underground. But she soon learns just how dangerous their world is—and what it will take to break the ancient bargain meant to keep her there.

Based on a classic British legend, this deliciously creepy novel from acclaimed author J. Anderson Coats is perfect for fans of Doll Bones and Coraline.
J. Anderson Coats has master’s degrees in history and library science and has published short stories in numerous literary magazines and anthologies. She is the author of the acclaimed novels The Wicked and the Just, The Many Reflections of Miss Jane Deming, R Is for Rebel, The Green Children of Woolpit, and The Night Ride. She lives with her family in Washington State. Visit her at JAndersonCoats.com.
“Agnes’s voice is precise, distinctive, and very beautiful, and her penchant for dreaminess underlines her difference from the other villagers—a quality that makes her vulnerable to Senna’s enticing lies. Senna is a sharp, survivalist foil for dreamy, good-hearted Agnes, and her history as a victim of brutal imperial conquest garners readerly sympathy even as she attempts to assume Agnes’ identity. . . . Agnes’ secure love for her family and her belief in the life-shaping power of stories bind this bittersweet book together. As Agnes says, ‘There should be more stories where girls help one another.’”
— BCCB

“There are multiple plot twists, alternating narrative voices (Senna, the girl Agnes replaces in the underground fairy world, has her own tale to tell), and frequent surprises due to the shifting illusions devised by the fairy folk. Through it all, Coats’s story maintains its strong central theme: Agnes’s determination to become the hero of a story—one that turns out to feature two girls helping each other.”
— The Horn Book

“Fraught with excitement and peril. Coats skillfully weaves in facts about the Fair Folk, Agnes’s parents, and the coming of the Romans to Britain in this tale that hearkens back to a medieval story first recorded by monks."
— School Library Journal