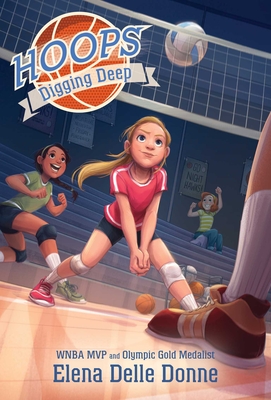 This is book number 4 in the Hoops series.

From WNBA MVP, Olympic gold medalist, and global ambassador to the Special Olympics Elena Delle Donne comes the fourth novel in a middle grade series with as much heart as there is game.

Elle is still reeling from her BIG decision but is also amazed at all the free time she has without basketball. With so much time to fill, she can figure out what she really likes doing—and maybe finding ways to spend more time with Amanda.

But when she keeps being drawn back to the gym, could her big decision have been a big mistake?
Elena Delle Donne has been a professional women’s basketball player since 2013, when she was selected by the Chicago Sky second overall in the WNBA draft. She was the 2015 WNBA MVP and won the gold medal with the USA’s women’s basketball team in the 2016 Olympics. She is the global ambassador for the Special Olympics and became the first national ambassador for the Lyme Research Alliance. Elena also plays host to De11e Donne Academy, a basketball camp that runs throughout the year, where she mentors and coaches girls ages seven to eighteen. She now plays for the Washington, DC, Mystics.
"Donne entices fans of realistic middle grade fiction by infusing this sports story with timely subjects such as bullying and friendship issues. She also uses her experience as an ambassador for both the Special Olympics and for the Global Lyme Alliance to add depth to the plot and characters. Highly recommended for middle grade sports collections."
— School Library Journal Online

"While avoiding melodrama, Donne humorously portrays Elle’s adjustment to her changing body and her increasing self-confidence and positivity. Play-by-play basketball action, friendship subplots, and the inspiration Elle draws from her older sister (who is deaf and blind and has autism and cerebral palsy) round out this engaging novel."
— Publishers Weekly on ELLE OF THE BALL