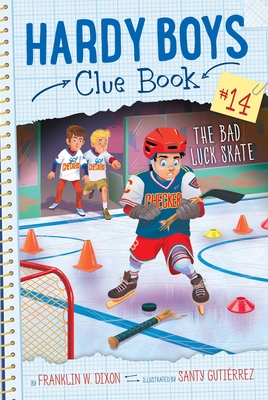 This is book number 14 in the Hardy Boys Clue Book series.

Detective brothers Frank and Joe search for a saboteur in the fourteenth book in the interactive Hardy Boys Clue Book series.

Frank and Joe are excited to be supporting their friends on the Bayport Checkers hockey team. Ever since Frank’s new friend Pete moved to town, the team’s season has turned around. Winning the championship would be the perfect reward for all their hard work.

But when someone dumps paint all over the team’s lucky skate just before the game, their star player worries their luck has run out. Then Pete’s stick breaks before he has to take the ice! Has the team really lost their luck or is someone trying to psych them out so they lose the game? Without a clear suspect, Frank and Joe are on thin ice.
Franklin W. Dixon is the author of the ever-popular Hardy Boys books.