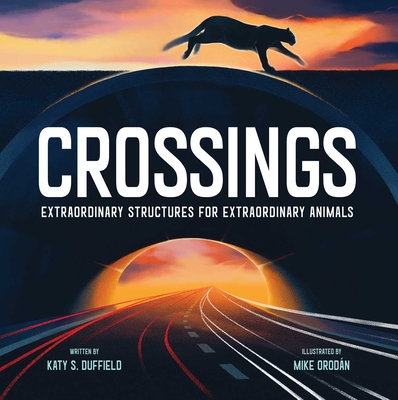 
On Our Shelves Now at:
This powerful nonfiction picture book explores wildlife crossings around the world and how they are helping save thousands of animals every day.

Around the world, bridges, tunnels, and highways are constantly being built to help people get from one place to another. But what happens when construction spreads over, under, across, and through animal habitats? Thankfully, groups of concerned citizens, scientists, engineers, and construction crews have come together to create wildlife crossings to help keep animals safe.

From elk traversing a wildlife bridge across a Canadian interstate to titi monkeys using rope bridges over a Costa Rican road to salamanders creeping through tiny tunnels beneath a Massachusetts street, young readers are certain to be delighted and inspired by these ingenious solutions that are saving the lives of countless wild animals.
Katy Duffield is the author of more than twenty-five books for children. She lives in Florida with her husband and her wild and crazy Australian Shepherd. For more information about Katy, please visit her website at KatyDuffield.com.

Mike Orodán is the author-illustrator of the Peek-a-Baby series, as well as Crossings by Katy Duffield. He lives in Surrey, England.
All over the world, humans build crossings to allow wildlife to pass freely over, under, across, and through busy highways.

Overpasses, underpasses, even rope bridges are the focus of this intriguing informational picture book. Duffield provides 12 examples of animal passages built for regular use or seasonal migration. A particularly nice touch is the map at the end, a shadowy map of continents with each animal appropriately placed and a few more facts about their situations. Elephants, pangolins, red crabs, koalas, squirrel gliders, and blue penguins come from the Eastern Hemisphere; elk, black bears, spotted salamanders, coyotes, panthers, and titi monkeys from the Western. Clean, crisp illustrations on double-page spreads show well, making this a good choice for a group read-aloud. There’s a two-level text, a simple sentence in a large font stating animal, crossing technology, and location, the smaller paragraphs providing further information about planning, specialized building, and uses. One early spread focuses on construction, showing a gender- and racially diverse human team and several big machines—drawing in readers and listeners more interested in equipment than animals. The story in pictures is nicely rounded, beginning with a question about the fate of a mother panther and her cub facing a car on a highway and ending with mother and cub safe on a cliff high above it. Readers can see the arching bridge that made that possible. (This book was reviewed digitally with 11-by-22-inch double-page spreads viewed at 85.5% of actual size.)

An unusual focus on one way humans and animals can coexist in our world. (bibliography) (Informational picture book. 3-7)
— Kirkus Reviews, STARRED

PreS-Gr 2–The refrain “over, under, across, and through” carries readers through this picture book depicting unique animal crossings. Each page features different animal families using human-made structures built specifically for them; these structures allow the families to travel through habitats that have been altered by human ­transportation routes. Realistic digital illustrations rendered in saturated brown, blue, green, and yellow tones capture movement and use bold angles and dynamic lines. A pair of coyotes trot over a freeway, a mama elephant and her baby amble under a busy street, monkeys climb across a rope bridge, and a penguin family waddles through a tunnel. Tender moments between parents and their young (a Florida panther shields her cubs from headlights veering toward them) are balanced by portrayals of animal families cheerfully playing in and using the crossings. Small blocks of informational text are included throughout the simple narrative. A final page contains additional information about animal crossings around the world. VERDICT An important, positive conservation message, and a perfect nonfiction addition to preschool story time or a beginning informational picture book collection.–Amy Fellows, Multnomah County Library, OR

Highlighting directional words—over, under, across, and through—this informational picture book begins with an image of a bridge, which will carry cars, under construction. The additional image of a bear under the bridge helps readers immediately consider how animals can travel safely, especially when humans have encroached on or even taken away their natural habitats. Luckily, engineers around the world have been creating innovate solutions. Double-page spreads with soft, textured illustrations spotlight some of these initiatives. Larger text, emphasizing the directional words again, gives a simple explanation of the animal’s movement, such as, “Coyotes creep OVER the rush of Arizona motorists below.” Smaller text offers details on the importance of the crossing. Other examples include tightropes that allow monkeys to travel above roads in Costa Rica, elevated pathways for pangolins to cross over Singapore expressways, and tiny crawlspaces for spotted salamanders to shimmy under Massachusetts streets. A concluding map pinpoints the crossing locations and presents more facts about each one. A lovely look at how STEM is solving problems and saving animals.
— Booklist

Directional concepts get an ecological twist in this book celebrating passages engineered for wildlife in habitats disrupted by human development. “A bull elk picks his way through evergreens OVER a noisy Canadian highway.// A mama elephant thunders UNDER a crowded Kenyan road.” Each animal and its human-constructed crossing receives a dedicated spread, calling out how it moves over, under, across, or through, while a small caption offers additional details: “The Trans-Canada Highway is home to more than forty wildlife overpasses and underpasses.”...With an appealing softness, Orodán’s pencil illustrations, finished in Photoshop, use light and shadow to show the constructed passages’ depth. A picture book for the Anthropocene.