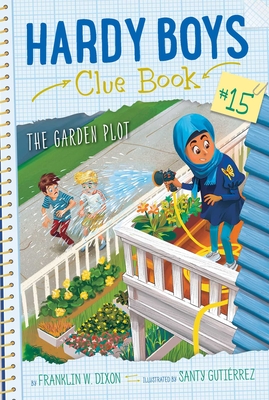 This is book number 15 in the Hardy Boys Clue Book series.

Detective brothers Frank and Joe weed out a vandal in the fifteenth book in the interactive Hardy Boys Clue Book series.

Frank and Joe Hardy have been hard at work turning their front yard into an eco-friendly edible landscape garden thanks to a contest sponsored by the Bayport Science Center. Frank’s really been enjoying learning about how to make the garden thrive, while Joe likes all of the cool critters and, of course, getting to munch on all of the yummy food.

When the prize vegetables being grown in some of the top competitors’ gardens are attacked, at first it looks like hungry pests have been having a feast. But as Frank and Joe unearth more evidence, it appears those cucumbers aren’t being crunched by creatures with a craving. No, the veggies are the target of a clever saboteur. The Hardys will have to figure out who’s been destroying the gardens fast, before their friends’ chances of winning the contest are shredded like lettuce.
Franklin W. Dixon is the author of the ever-popular Hardy Boys books.