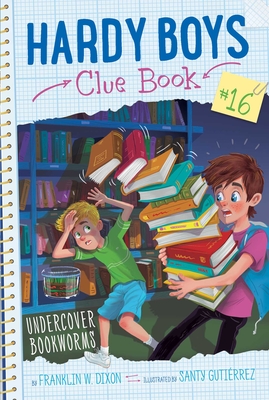 This is book number 16 in the Hardy Boys Clue Book series.

Detective brothers Frank and Joe catch a book crook to save their library in the sixteenth book in the interactive Hardy Boys Clue Book series.

One of Frank and Joe Hardy’s favorite places to hang out is the Bayport Junior Public Library. Having a library just for kids is the best, and they love the real-life bookworm mascots, a whole farm of them! But the town council is facing budget cuts and will vote soon on whether to shut down the BJPL and combine locations with the adult library. Just when the boys’ librarian is starting to sway the council in her favor, a valuable book goes missing from the Rare Reads Room!

The Hardy brothers are determined to find the missing book and save the library. Joe pulls out a rare book of his own—the clue book! There are plenty of suspects, from the councilwoman who’s in favor of folding the junior library to their classmate Jeffrey Le Guin who was temporarily suspended from the library for making too much noise. But the more they investigate, the more they realize that you can’t judge a crook by their cover.
Franklin W. Dixon is the author of the ever-popular Hardy Boys books.