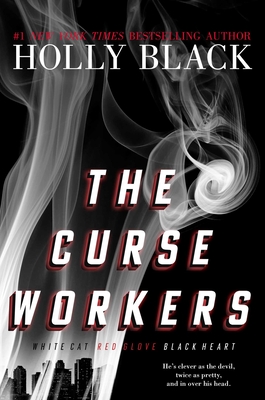 Cassel Sharpe comes from a family of curse workers, people who have the power to change emotions, memories, and luck with the slightest touch of their hands. And since curse work is illegal, they’re also all criminals. Many become mobsters and con artists, but not Cassel. He doesn’t have magic, so he’s an outsider, the straight kid in a crooked family—except for the small detail that he killed his best friend, Lila, three years ago.

Cassel has carefully built up a facade of normalcy, blending into the crowd. But his facade starts to crumble when he finds himself sleepwalking, propelled into the night by terrifying dreams about a white cat that wants to tell him something. He’s noticing other disturbing things, too, including the strange behavior of his two older brothers, who are keeping secrets from him. As Cassel begins to suspect he’s an unwitting pawn in a huge con game, he must unravel his past, and his memories. To find the truth, Cassel will have to out-con the conmen.

This magical bind-up includes:
White Cat
Red Glove
Black Heart
Holly Black is the #1 New York Times bestselling and award-winning author of speculative and fantasy novels, short stories, and comics. She has been a finalist for an Eisner and a Lodestar Award, and the recipient of the Mythopoeic and Nebula Awards and a Newbery Honor. She has sold over twenty-six million books worldwide, and her work has been translated into over thirty languages and adapted for film. She currently lives in New England with her husband and son in a house with a secret library. Visit her at BlackHolly.com.
"Witty, twisty, and impossible to put down, Holly Black's Curse Workers series delivers magical heists and a young conman who is as flawed as he is brilliant. This is the kind of story—full of delightful, daring narrative sleight of hand—that kept me guessing with every page and that I won't soon forget."
— Leigh Bardugo, #1 New York Times bestselling author