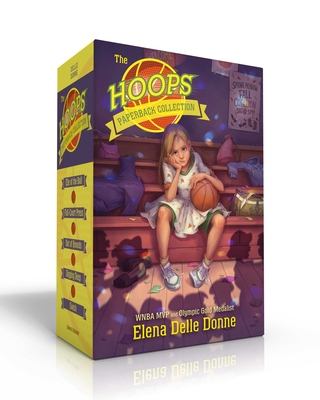 From WNBA MVP, Olympic gold medalist, and global ambassador to the Special Olympics Elena Delle Donne comes a middle grade series with as much heart as there is game—now in a collectible paperback boxed set!

Elle Deluca is a seventh grader who is tall—not just sort of tall. She’s six feet tall. And her basketball team has high hopes for her. Elle throws herself into the game but struggles to deal with the pressure to perform well and even starts to wonder if the thrill of her former favorite sport is worth the weight of everyone’s expectations.

Follow Elle’s journey to stay true to herself through all five books of the Hoops series in this boxed set that includes:
Elle of the Ball
Full-Court Press
Out of Bounds
Digging Deep
Swish
Elena Delle Donne has been a professional women’s basketball player since 2013, when she was selected by the Chicago Sky second overall in the WNBA draft. She was the 2015 WNBA MVP and won the gold medal with the USA’s women’s basketball team in the 2016 Olympics. She is the global ambassador for the Special Olympics and became the first national ambassador for the Lyme Research Alliance. Elena also plays host to De11e Donne Academy, a basketball camp that runs throughout the year, where she mentors and coaches girls ages seven to eighteen. She now plays for the Washington, DC, Mystics.