Hope Is an Arrow: The Story of Lebanese-American Poet Khalil Gibran (Hardcover) 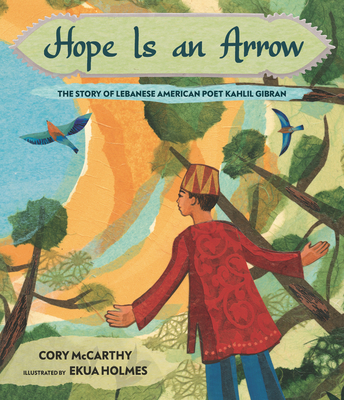 Hope Is an Arrow: The Story of Lebanese-American Poet Khalil Gibran (Hardcover)

Before Kahlil Gibran became the world’s third-best-selling poet of all time, he was Gibran Khalil Gibran, an immigrant child from Lebanon with a secret hope to bring people together despite their many differences. Kahlil’s life highlights the turn of the twentieth century, from the religious conflicts that tore apart his homeland and sent a hundred thousand Arab people to America, to settling in Boston, where the wealthy clashed headlong with the poor. Throughout it all, Kahlil held on to his secret hope, even as his identity grew roots on both sides of the Atlantic. How could he be both Kahlil Gibran, Arab American, and Gibran Khalil Gibran, the Lebanese boy who longed for the mountains of his homeland? Kahlil found the answer in art and poetry. He wrote The Prophet, an arrow of hope as strong as the great cedars of Lebanon and feathered by the spirit of American independence. More than a hundred years later, his words still fly around the world in many languages, bringing people together.
Cory McCarthy writes for children and young adults, including their verse novel, Name Me America, which won the middle grade category of the 2014 Katherine Paterson Prize from Hunger Mountain, and Breaking Sky, currently under option with Sony Pictures. They hold a degree in poetry from Ohio University and an MFA in writing for children and young adults from Vermont College of Fine Arts. Like Kahlil Gibran, their family emigrated from Lebanon and settled in New England. Cory McCarthy lives in Vermont with their family and is on faculty at Vermont College of Fine Arts.

Ekua Holmes is the illustrator of numerous books for children, including Voice of Freedom: Fannie Lou Hamer, Spirit of the Civil Rights Movement by Carole Boston Weatherford, for which she received several awards, including a Caldecott Honor, the John Steptoe New Talent Illustrator Award, and a Boston Globe–Horn Book Honor; Out of Wonder: Poems Celebrating Poets by Kwame Alexander, Chris Colderley, and Marjory Wentworth, for which she received the 2018 Coretta Scott King Illustrator Award; and The Stuff of Stars by Marion Dane Bauer, for which she received the 2019 Coretta Scott King Illustrator Award. Ekua Holmes lives in Boston.
This poignant, brilliant biography about Gibran Kahlil Gibran (The Prophet), a Lebanese and American poet and artist of international renown, creates a beautiful space for Gibran to live on for this generation. Bursting with brilliant collage and acrylic artwork and incorporating Gibran’s own poetry during stirring moments of crisis and reflection, McCarthy and Holmes develop a picture book steeped in facts, artistically bold and texturally captivating, while also connecting to relatable social-emotional issues. . . a stunning biography.
—School Library Journal (starred review)

Striking. . . Holmes’s bold, color-saturated collages and acrylics are a stirring match for McCarthy’s poetic prose—the family sails across 'the deeper, darker Atlantic Ocean, which murmured like a giant in its sleep'—in a telling that emphasizes the figure’s complexity.
—Publishers Weekly (starred review)

Inserting lines and stanzas from The Prophet throughout, McCarthy highlights the moments and episodes of Gibran’s life that seem to have influenced his work. Holmes’s (Dream Street, rev. 9/21) collage and acrylic illustrations work well to highlight the contrasting settings of Lebanon and Boston of the late-nineteenth and early-twentieth centuries; her art is particularly stunning in the opening pages that depict Gibran’s childhood days.
—The Horn Book (starred review)