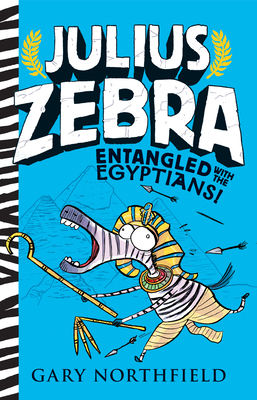 This is book number 3 in the Julius Zebra series.

Julius Zebra is in ancient Egypt on his third madcap adventure. Will he and his friends make it out alive, or will they all end up entombed in a pyramid forever?

After being shipwrecked on the shores of Egypt, Julius Zebra can’t believe his luck: he’s been mistaken for a Horse God and given the royal treatment. Preened and pampered, Julius and his friends are treated to a lavish party and ferried down the River Nile. But when hapless antelope Felix accidentally stumbles upon the Tomb of Cleopatra, he steals a gem for his rock collection, unknowingly bringing a pharaoh’s curse down upon the group. With the Egyptians beginning to realize that Julius is not quite what they thought he was, the zebra gladiator and his friends are soon fighting for their lives in a series of hilarious hijinks.
Gary Northfield is best known for his Derek the Sheep comic strip and has been writing and drawing comics for fifteen years. He lives in England.