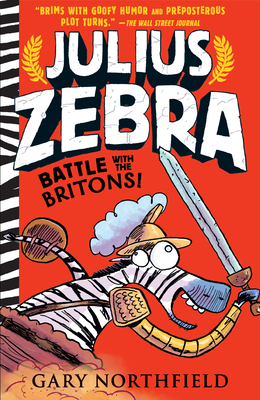 This is book number 2 in the Julius Zebra series.

Think you know Julius Zebra? Think again! The handsome, fast-talking gladiatorial champion is sent on a zany adventure — to Britannia!

Before Julius Zebra can have his freedom, Emperor Hadrian sends him on one last mission. As the newly named People’s Champion, Julius must travel with his friends to a distant land to remind its people of the might of the Roman Empire. It’ll be just like a vacation! But when the motley menagerie of gladiators arrives in cold, wet Britannia, they don’t quite receive the welcome they were expecting. In fact, the Britons seem to hate the Romans. And the longer Julius and his friends stay in Britannia, the more they realize that they have a lot more in common with the Britons than they thought. After all, they’re all under Hadrian’s rule. But what can a ragtag group of fighting animals do about it?
Gary Northfield is best known for his Derek the Sheep comic strip and has been writing and drawing comics for fifteen years. He lives in England.
Those treacherous Romans are ripe for a fall…and Julius is just the zebra to give them a push.
—Kirkus Reviews

Northfield’s cartoonlike line illustrations win the day in this second Julius Zebra entry, capturing the story’s comical heart. Kids will be enamored by its ridiculous, action-oriented plot, and unwitting spectators to the bits of history Northfield manages to sneak in between the gags.
—Booklist

This sequel to 2016’s ‘Julius Zebra: Rumble With the Romans!’ brims with goofy humor and preposterous plot turns...As Julius and his companions join in fresh bouts of (bloodless) combat, readers ages 7-11 will pick up bits of classical language and history in this zany entertainment.
—The Wall Street Journal