Shadowghast (The Legends of Eerie-on-Sea #3) (Hardcover) 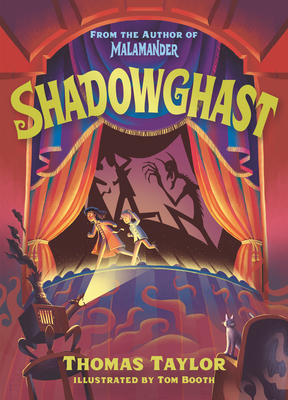 Shadowghast (The Legends of Eerie-on-Sea #3) (Hardcover)

This is book number 3 in the The Legends of Eerie-on-Sea series.

In the third mysterious tale of Eerie-on-Sea, it’s almost Ghastly Night, and the Shadowghast—an ancient spirit in a lantern—lurks in wait for the power to enslave the town.

In this third adventure, shipwrecked orphan Herbert Lemon, Lost-and-Founder at the Grand Nautilus Hotel, must square off with a creature of town lore as he confronts a shadow from his past. While other towns celebrate Halloween, in Eerie-on-Sea it’s Ghastly Night, and a grim spirit in a lantern awaits its moment. Legend has it that if people fail to light manglewick candles on Ghastly Night, and if no showman conjures shadow puppets on the pier as an offering, the insulted Shadowghast will seize and devour the shadows of the living. This year, a professional theater troupe has been summoned, including a raven-haired magician named Caliastra with startling news of Herbie’s origins. No sooner have the players checked into the hotel than townspeople start vanishing into thin air, including the guardian of Herbie’s best friend, Violet Parma. It’s up to Herbie and Violet to separate truth from sleight of hand and solve the mystery of the Shadowghast lantern before darkness swallows them all.
Thomas Taylor has illustrated many books for young readers, including the graphic novel Scarlett Hart: Monster Hunter by Marcus Sedgwick. He marked his debut as a middle-grade author with Malamander, the first book in the Legends of Eerie-on-Sea series, as well as Gargantis, its sequel. Thomas Taylor lives on the south coast of England.

Tom Booth is an art director and the author-illustrator of several acclaimed children’s books, including Don't Blink!,This Is Christmas, and Who Wins?, as well as the illustrator of Malamander and Gargantis. He lives in Brooklyn, New York.
Instead of Halloween, Eerie-on-Sea townsfolk celebrate Ghastly Night, lighting manglewick candles to keep the legendary Shadowghast from stealing their shadows. . . . Inventive plotting, spooky atmospherics, and quirky humor will keep readers entertained. . . . Readers will revel in the shivery mood.
—Kirkus Reviews

The author hits all the right notes for readers who delight in having (as Herbert puts it) their 'niblets go knobbly.'
—Booklist

Filled with all of the exciting twists, delicious humor, vivid characterization, and visual description of other books in the series (Malamander, Gargantis), readers will relish this third foray into the unique town and its memorable inhabitants.
—School Library Journal