Voices from the Second World War: Stories of War as Told to Children of Today (Paperback) 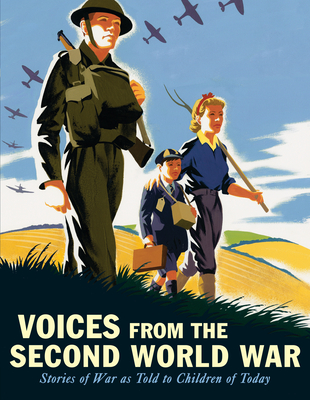 Voices from the Second World War: Stories of War as Told to Children of Today (Paperback)


Special Order—Subject to Availability
In an intergenerational keepsake volume, witnesses to World War II share their memories with young interviewers so that their experiences will never be forgotten.

The Second World War was the most devastating war in history. Up to eighty million people died, and the map of the world was redrawn. More than seventy years after peace was declared, children interviewed family and community members to learn about the war from people who were there, to record their memories before they were lost forever. Now, in a unique collection, RAF pilots, evacuees, resistance fighters, Land Girls, U.S. Navy sailors, and survivors of the Holocaust and the Hiroshima bombing all tell their stories, passing on the lessons learned to a new generation. Featuring many vintage photographs, this moving volume also offers an index of contributors and a glossary.
Firsthand accounts of World War II, many collected by modern children...A fine tool for any child interested in history as well as for classroom, school, and public libraries.
—Kirkus Reviews

WWII ended more than 70 years ago, yet interest in it remains evergreen, as this fascinating work of living history evidences...Though many of those featured are elderly—one is more than 100 years old—their memories are vivid and bring to light the realities of war in this valuable collection.
—Booklist

First published in Britain, this is an anthology of firsthand accounts collected by children who interviewed elderly relatives and neighbors about their war experiences...the book traces the broader course of the conflict while making the suffering it inflicted and the heroism it inspired personal and relatable. One reporter notes: ‘There were many people…for whom the events of the war were so agonizing they never talked about their experiences. I believe it is important that we hear those stores.’ Numerous photos put faces to the storytellers. Grade: A
—Plain Dealer

Because the majority of the interviews were done by and written for children, the accounts are not overly graphic, making this an ideal book to keep in upper elementary/middle school classes and libraries. It is an excellent resource for history buffs and for those who may not know much about the time period.
—School Library Connection