I Am a Bird (Hardcover) 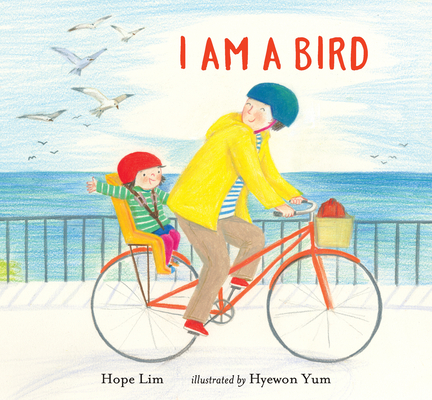 I Am a Bird (Hardcover)


Not On Our Shelves—Ships in 1-5 Days
On her daily bike ride with her dad, a bird-loving little girl passes a woman who frightens her—until she discovers what they have in common.

Every day, a little girl rides to school on the back of her father's bike. As they twist and turn through the streets, the little girl spreads her arms like wings and sings her birdsong for all to hear. But when they pass a strange woman in blue who carries a mysterious bag, the girl goes quiet until the woman is out of sight. One day, when they’re running late, the little girl discovers what the woman does with her bag each morning—a surprise that transforms her wariness into a feeling of kinship to be celebrated. Hope Lim’s simple text and Hyewon Yum’s delicate, expressive illustrations create a touching story that encourages readers to embrace our similarities rather than focus on our differences.
Hope Lim is a debut children's book author. She has a bachelor’s in English literature and has worked as a conference interpreter for the US State Department. Hope Lim lives in San Francisco.

Hyewon Yum is the author and illustrator of several acclaimed books for children, including Mom, It’s My First Day of Kindergarten!, which earned her an Ezra Jack Keats New Illustrator Award, and Saturday Is Swimming Day. She is also the illustrator of A Piece of Home, written by Jeri Watts. Hyewon Yum lives with her family in Brooklyn, New York.
'I fly like a bird on Daddy’s bike,' the narrator joyfully croons as we watch father and daughter whizz through a coastal, colored-penciled town. . . . Suddenly she spies 'a woman with a blue coat and a big bag … walking very fast,' and clutches her dad’s sweatshirt, as gouache graffiti demons appear on a wall and a graphite shadow joins the gray-haired figure like an evil twin. Yet there she is one day in the park, 'whispering a song to the birds!' Lim’s text and Yum’s art soar as the two 'see' each other at last.
—New York Times Book Review

The soft, textured illustrations expertly pair with the understated text and its beautifully simple, implicit message to look closer before jumping to conclusions...A gentle story about connection that will connect with readers of all ages.
—Kirkus Reviews (starred review)

A little girl and her father take regular bike rides through their coastal town...It’s a tale that celebrates imagination; birds (the monochromatic drawings of graceful birds in flight on the endpapers are a highlight); and the value of getting past fears to discover that we all have more in common than we might think.
—The Horn Book

Lim’s simple, heartfelt narration deftly captures the perturbation kids can develop around an adult who seems unfriendly, and there’s enough amiable reassurance to counterbalance the sympathy. Yum’s softly textured colored pencil and gouache illustrations capture the airy freedom of a zippy bike ride through a lovely seaside Korean (judging by store lettering) town...Kids who’ve had their own encounters with hard-to-slot adults will appreciate the validation and the encouraging outcome.
—Bulletin of the Center for Children's Books

Each day, a rosy-cheeked girl rides to school in the booster seat on the back of Daddy’s bike, pretending to fly and sing like the many birds in their coastal town... It’s a simple tale for the youngest set of readers, written around an overt message of not judging too quickly and finding connections in unexpected ways... Yum’s soft colored-pencil illustrations complement the words with a pleasant atmosphere, setting the tone through gently bright colors and the simple, smiling features of her characters... A sweetly serene story with a useful lesson.
—Booklist