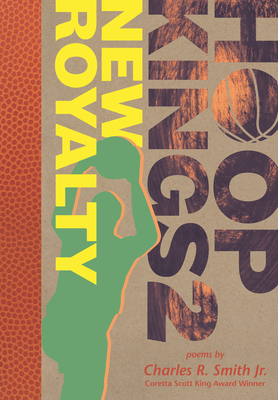 What’s your game? Can you fly like Blake Griffin? Are you a lightning-fast force of nature like Russell Westbrook? Or are you a chameleon on the court, racking up nicknames like Steph Curry? From James Harden with his shimmy-shake-spin to “Lord of the Leap, Sir Alley of the Oop” Lebron James, here are a dozen profiles honoring the superb talents and skills of some of the best players in NBA basketball. With bold, graphic photographs and fun, accessible poems infused with his indomitable wordplay, Charles R. Smith Jr. captures the agility and finesse that each of these professionals brings to the game. Poem notes about each featured player offer further inspiration at the end.
Charles R. Smith Jr. is the author of Hoop Queens and its companion, Hoop Kings, as well as Pick-Up Game, Chameleon, and Twelve Rounds to Glory, a Coretta Scott King Author Award Honor Book. He is also the recipient of a Coretta Scott King Illustrator Award for his photographs accompanying Langston Hughes’s poem in My People. Charles Smith Jr. lives in New York.
All-star–caliber poems inspired by all-star NBA players. With varied rhyme schemes, rhythmic structures, and forms wrapped around high-energy art, Smith’s newest addition to his b-ball–celebrating poetry collections is a solid refresher on some of the who’s who of today’s NBA. . . thoughtful and cleverly representative of the on-court production of 12 outstanding players from Anthony Davis to Russell Westbrook.
—Kirkus Reviews

This poet’s still got game.
—Booklist