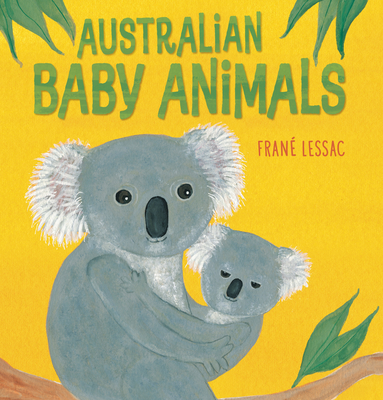 
Special Order—Subject to Availability
Playful verses, captivating facts, and vibrant colors will have little animal lovers poring over these pages about the young of several species.

Do you know which Australian baby animal is called a puggle? (Hint: it’s not a designer dog!) Which babies are called joeys? (You’ll be surprised at how many.) Which baby animals from Australia are looked after by their dad? What animal is carried around—gingerly—in its mother’s toothy mouth? Frisky little dingoes may be called pups, but so are a type of bat called flying foxes. There are so many unusual things to learn about Australian baby animals in this simple and satisfying book from award-winning creator Frané Lessac.
Frané Lessac is the creator of Under the Milky Way and its companion book, Under the Southern Cross, as well as A Is for Australian Animals and Island Counting 1 2 3. She has illustrated numerous books for children, including the Robert F. Sibert Honor Book We Are Grateful: Otsaliheliga by Traci Sorell, Pattan’s Pumpkin by Chitra Soundar, and with author Mark Greenwood, Midnight: The Donkey of Gallipoli, and The Greatest Liar on Earth. She was born in the United States and now lives in Australia.