Robert E. Lee: A Reference Guide to His Life and Works (Hardcover) 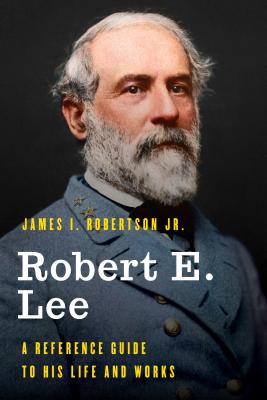 Robert E. Lee: A Reference Guide to His Life and Works (Hardcover)

By James I. Robertson


Not On Our Shelves—Ships in 1-5 Days
Robert E. Lee: A Reference Guide to His Life and Works covers all aspects of his life and work, including individuals, places, and events that shaped Lee's career as a Virginian, soldier, and peacemaker. The extensive A to Z section includes several hundred entries. The bibliography provides a comprehensive list of publications concerning his life and work. -Includes a detailed chronology detailing Robert E. Lee's life, family, and work. -The A to Z section includes family members, campaigns in two different wars, cities as well as rivers and land areas of the time, military strategy and tactics, lieutenants and opponents, army organization, politics contending with war, plus seldom-mentioned topics such as geography, earthworks, desertion, personal health, and even the legendary "Rebel Yell." -The bibliography includes a list of publications concerning his life and work. -The index thoroughly cross-references the chronological and encyclopedic entries.
James I. Robertson, Jr., served as Executive Director the U. S. Civil War Centennial Commission and worked closely with Presidents Kennedy and Johnson in marking the national commemoration of the war. He also was an active member of the Virginia Civil War Sesquicentennial Commission, which led America's remembrance of the 150th anniversary of the nation-making struggle. During the Sesquicentennial period, he became father of the state's new official song, "Our Great Virginia." He is the founding executive director of the Virginia Center for Civil War Studies research and education center. He is considered the preeminent scholar on Confederate Lieutenant General Thomas J. Stonewall Jackson. Robertson was the Chief Historical Consultant in the 2003 Warner Brothers film Gods and Generals, which prominently features Stonewall Jackson.