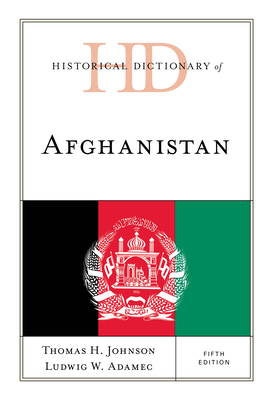 
Not On Our Shelves—Ships in 1-5 Days
Afghanistan is an extremely complex and nuanced country that has been one of the centers of imperial conflict at least for 150 years. From the Czarist Russia's march south in the 19th Century threatening British India, three Anglo-Afghan Wars, the Soviet Invasion and occupation of Afghanistan starting in December 1979 and the resulting anti-Soviet Jihad by the Afghan Mujahideen to Kabul's and their allies' (U.S. and NATO) conflict with the Taliban, Afghanistan has been one of the centers of important international and regional conflicts and events. Historical Dictionary of Afghanistan, Fifth Edition contains a chronology, an introduction, and an extensive bibliography. The dictionary section has more than 1,000 cross-referenced entries on important personalities as well as aspects of the country's politics, economy, foreign relations, religion, and culture. This book is an excellent resource for students, researchers, and anyone wanting to know more about Afghanistan.
Thomas H. Johnson is a research professor of the national security affairs department at the Naval Postgraduate School (Monterey, California) as well the director of the program for culture & conflict studies. For over three decades he has conducted research and published widely on Afghanistan and South Asia. His most recent book, Taliban Narratives: The Uses and Power of Stories in the Afghanistan Conflict was co-published by Oxford University Press and Hurst Publishers (London) in 2018. Ludwig W. Adamec was professor at the University of Arizona and had served as the director of the Near Eastern Center for 10 years. He was widely known as a leading authority on Afghanistan and the author of 24 volumes and numerous articles and monographs, including the Historical Dictionary of Islam, Second Edition (Scarecrow, 2009) and Historical Dictionary of Afghan Wars, Revolutions, and Insurgencies (Scarecrow, 2005).