Heidegger in Question: The Art of Existing (Paperback) 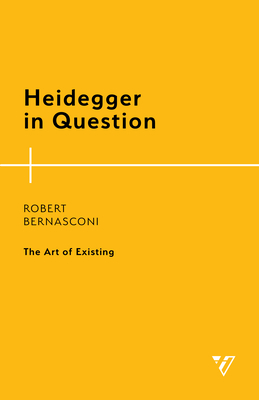 Heidegger in Question: The Art of Existing (Paperback)


Not On Our Shelves—Ships in 1-5 Days
(This book cannot be returned.)
Robert Bernasconi explores in the context of Heidegger's thought a number of questions of far-reaching concern: what is the role of literary examples within philosophy? Is art dead? What is the relation of art to nature? Is there a place for the idea of a "people" in art and literary theory, and in philosophy? Is the history of philosophy to be written as a narrative? What is the status of ethics within philosophy? What place does philosophy give to praxis? What is the place today of the belief in the nobility of the philosophical life? What is the relation of politics to thought? Reflecting a dominant concern of recent Heidegger scholarship, the focal point of a number of the essays is the relation of Heidegger's own politics to his thought. In addition to this examination of what appears to compromise Heidegger's philosophy, Bernasconi explores its relation to the further possibilities which that thought has opened in the writings of Arendt, Gadamer, Levinas, and Derrida.
Robert L. Bernasconi is Edwin Erle Sparks Professor of Philosophy at Pennsylvania State University. He is well known as a reader of Martin Heidegger and Emmanuel Levinas, and for his work on the concept of race. He has also written on the history of philosophy. His books include How to Read Sartre (2007), Heidegger in Question: The Art of Existing (1993) and, co-edited with Simon Critchley, The Cambridge Companion to Levinas (2002).