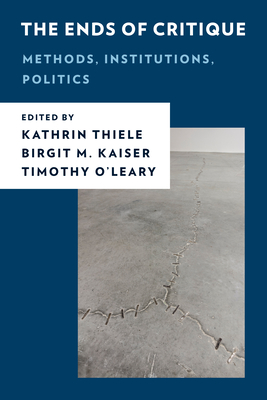 
Not On Our Shelves—Ships in 1-5 Days
(This book cannot be returned.)
The Ends of Critique re-examines the stakes of critique in the 21st century. In view of increasingly complex socio-political realities and shifts in a fully globalized world, the roles and manners of critique also change. The volume offers an unprecedented re-examination of critique under those conditions of global entanglement and asymmetrical relations from a diversity of scholarly perspectives within the humanities. All contributions move the notion of critique into more diverse traditions than the Eurocentric, Kantian tradition and emphasize the need to attend to a plurality of critical perspectives. The volume's reflections move critique toward a situated, perspectival, and entangled critical stance, with interventions from decolonial and systemic, deconstructive and (post)human(ist) perspectives. In that way, the volume develops a decidedly different approach to critique than recent considerations of critique as post-critique (Felski) or those endebted to Frankfurt School thought and liberal theories of democracy. It is the first full-length research publication of the interdisciplinary research network Terra Critica.
Kathrin Thiele is associate professor of gender studies and critical theory in the Department of Media and Culture Studies at Utrecht University. Trained transdisciplinarily in gender studies, sociology, literary studies, and critical theory, her research focuses on questions of ethics and politics from queer feminist, decolonial and posthuman(ist) perspectives. Birgit M. Kaiser is associate professor of comparative literature and transcultural aesthetics at Utrecht University. Her research spans literatures in English, French and German of the nineteenth to the twenty-first century, always with a focus on literature as a mode of poetic knowledge production, on the relation of literature, aesthetics, and affect, as well as on writing subjectivity in transcultural and post/colonial constellations of power. Together, Kathrin Thiele and Birgit M. Kaiser founded and coordinate the international group Terra Critica: Interdisciplinary Network for the Critical Humanities (http: //terracritica.net). Timothy O'Leary is Head of the School of Humanities & Languages at the University of New South Wales, Sydney. He researches in contemporary European philosophy, in particular the work of Michel Foucault. Recently he has focused on the transformative potential of the engagement with works of literature.