Walden, and On The Duty of Civil Disobedience (Fine Print) (Paperback) 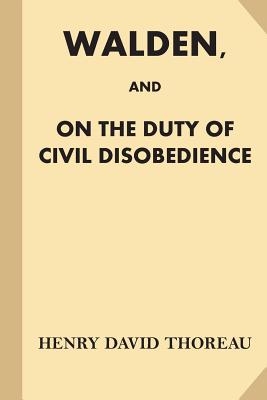 Walden, and On The Duty of Civil Disobedience (Fine Print) (Paperback)


Not On Our Shelves—Ships in 1-5 Days
(This book cannot be returned.)
Walden (first published as Walden; or, Life in the Woods) is a book by noted transcendentalist Henry David Thoreau. The text is a reflection upon simple living in natural surroundings. The work is part personal declaration of independence, social experiment, voyage of spiritual discovery, satire, and (to some degree) manual for self-reliance. First published in 1854, Walden details Thoreau's experiences over the course of two years, two months, and two days in a cabin he built near Walden Pond, amidst woodland owned by his friend and mentor Ralph Waldo Emerson, near Concord, Massachusetts. Thoreau used this time to write his first book, A Week on the Concord and Merrimack Rivers. The experience later inspired Walden, in which Thoreau compresses the time into a single calendar year and uses passages of four seasons to symbolize human development. By immersing himself in nature, Thoreau hoped to gain a more objective understanding of society through personal introspection. Simple living and self-sufficiency were Thoreau's other goals, and the whole project was inspired by transcendentalist philosophy, a central theme of the American Romantic Period.
-Wikipedia On The Duty of Civil Disobedience formerly known as Resistance to Civil Government (Civil Disobedience)] is an essay by American transcendentalist Henry David Thoreau that was first published in 1849. In it, Thoreau argues that individuals should not permit governments to overrule or atrophy their consciences, and that they have a duty to avoid allowing such acquiescence to enable the government to make them the agents of injustice. Thoreau was motivated in part by his disgust with slavery and the Mexican-American War (1846-1848).
-Wikipedia
___________________________________________
TABLE OF CONTENTS
Economy
Where I Lived, and What I Lived For
Reading
Sounds
Solitude
Visitors
The Bean-Field
The Village
The Ponds
Baker Farm
Higher Laws
Brute Neighbors
House-Warming
Former Inhabitants and Winter Visitors
Winter Animals
The Pond in Winter
Spring
Conclusion
ON THE DUTY OF CIVIL DISOBEDIENCE