The Socialist Manifesto: The Case for Radical Politics in an Era of Extreme Inequality (Hardcover) 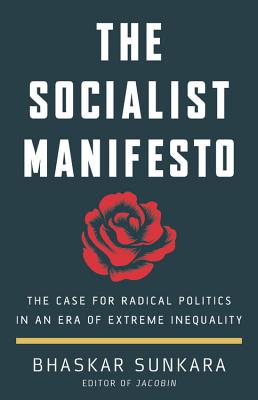 The Socialist Manifesto: The Case for Radical Politics in an Era of Extreme Inequality (Hardcover)


Special Order—Subject to Availability
A "razor-sharp" introduction to this political and economic ideology makes a galvanizing argument for modern socialism (Naomi Klein) -- and explains how its core tenets could effect positive change in America and worldwide.
In The Socialist Manifesto, Bhaskar Sunkara explores socialism's history since the mid-1800s and presents a realistic vision for its future. With the stunning popularity of Bernie Sanders and Alexandria Ocasio-Cortez, Americans are embracing the class politics of socialism. But what, exactly, is socialism? And what would a socialist system in America look like? The editor of Jacobin magazine, Sunkara shows that socialism, though often seen primarily as an economic system, in fact offers the means to fight all forms of oppression, including racism and sexism. The ultimate goal is not Soviet-style planning, but to win rights to healthcare, education, and housing, and to create new democratic institutions in workplaces and communities. A primer on socialism for the 21st century, this is a book for anyone seeking an end to the vast inequities of our age.
Bhaskar Sunkara is the founder and editor of Jacobin, which he launched in 2010 as an undergraduate at George Washington University. He has written for the New York Times, the Guardian, VICE, and The Washington Post. Sunkara is also the publisher of Catalyst and the UK-based Tribune. He lives in Brooklyn, New York.
"An exciting and accessible
text for young socialists attempting to forge a new political path into the
21st Century...With millions of youth flocking to socialist ideas and with
politicians such as Bernie Sanders, Jeremy Corbyn, and Alexandria Ocasio-Cortez
leading the charge, Bhaskar Sunkara makes a convincing case that this time
around we just might get it right."—In These Times

"An essential read for anyone
curious about how the resurgent American left thinks."—Commonweal

"What Sunkara wants is a
truly democratic, inclusive, egalitarian socialism...[He] is asking us to try to
squeeze through the cracks of existing yet inadequate alternatives and dare to
imagine something new...Even for those who harbor some doubts, Sunkara's point of
view has many virtues."—Democracy Journal

"To read The Socialist Manifesto or any other major works of the modern left is to be immersed in a movement sure of its own moral worth, clear on what it believes in and willing to fight for it...This is what American liberals need to learn from."—Vox

"[Sunkara] puts his faith in
a disciplined political movement advocating reforms that improve people's lives
in the here-and-now while laying a foundation for ever-more aggressive
challenges to capital...Rejecting the choice between a counterproductive politics
of purity and a deflating acceptance of the status quo...he insists that
socialists can be more than junior partners in a coalition dominated by
liberals."—Dissent

"When it comes to the growth and appeal of socialism in the United States, Bhaskar Sunkara has played a tremendously important role...The Socialist Manifesto is important reading for our tumultuous and transformative present."—Pop Matters

"Smart...A bright, energetic, and politically sophisticated millennial, Sunkara clearly believes that now is the time for such a book...The Socialist Manifesto helps to explain...resurgent socialism, and this is a good thing."—Los Angeles Review ofBooks

"Sunkara's arguments are anchored in sturdy common sense...American political culture could certainly use more popularizations like The Socialist Manifesto."—The Progressive

"The book speaks to the
reader in a straightforward, down-to-earth fashion...Impressive."—New Politics

"A smartly composed overture
to non-socialists, illuminating both the movement's history and potential for
those who may doubt, worry about, or even hate what they understand as
'socialism.'...Sunkara's vision is thrillingly non-utopian...He writes with clarity
and light-heartedness...emphasis[ing] how socialism enables greater choice,
leaves markets intact, is about participation and democracy, is created through
reform, and is ultimately about freedom."—New Statesman

"Anyone doubting the arguments for socialism, should read Bhaskar Sunkara's The Socialist Manifesto."—Counterpunch

"Concise and
intelligent...Sunkara is deep in conversation with his own side. And his take is
acutely, and refreshingly, realistic."—Herald (Scotland)

"It testifies in no small part to Sunkara's achievement in Jacobin that left-curious American teenagers today would no longer find themselves as intellectually lonely as he (and, for what it's worth, I) once did,

and that the broad Marxist tradition no longer looks like such an antiquarian or specialist concern,"—Benjamin Kunkel, NewLeft Review

"Sunkara describes the socialist tradition from Marx to the present and outlines the benefits of a socialist society.... A sharp, hopeful, and useful primer."—Kirkus Reviews

"In this erudite call to action, Sunkara, publisher of Jacobin magazine, draws lessons from the history of various socialist movements to imagine how socialism could rise in the U.S..... His recommendations for today's socialists are logical and well-informed."—Publishers Weekly

"Accessible, irreverent and entertaining, Bhaskar Sunkara has delivered a razor-sharp guide to socialism's history, transformative promise, and path to power. This book also serves as an irresistible invitation to join in building that power, and in shaping the radically democratic future that is our best hope in these make-or-break times."—Naomi Klein, New York Times-bestselling author of This Changes Everything and No is Not Enough

"Thanks to the dysfunctionality of contemporary capitalism, 'socialism' has reentered the American political vocabulary, especially among the young. In The Socialist Manifesto, Bhaskar Sunkara gives us a lively account of socialism's history and current meanings, and makes the case for a genuine alternative to our deeply unequal social and political order."—Eric Foner, DeWitt Clinton Professor of History, emeritus, Columbia University

"A brilliantly compelling vision of why the US is ripe for socialism in the twenty-first century, from one of the brightest stars of the American left. Essential reading for anyone who wants to build a new society based on people's needs, not profit for the elite."—Owen Jones, Guardian columnist and the author of Chavs: The Demonization of the Working Class

"American politics is gripped by the worst kind of debate over socialism: one where everyone has an opinion, but few know what they're talking about. In this book, Bhaskar Sunkara, one of America's leading socialists, shows what socialism is and how it might work. Whether you consider yourself a socialist or just want to argue with socialists, this is the place to start."—Ezra Klein, founder and editor-at-large of Vox

"Through his work pioneering work with Jacobin, Bhaskar Sunkara has been one of the most important global voices provoking a new worldwide conversation about socialism for a whole new generation of people, drowning in wealth inequality and economic crises, who are newly receptive to its core precepts. In The Socialist Manifesto, Sunkara strengthens his arguments even more powerfully, offering not just a compelling economic case for socialism, but a deeply moral one. Written with the kind of urgency and clarity that can move people, while dispensing with much of the ossified academic jargon that has often plagued and crippled discourse around socialism, Sunkara's book is crucial for obliterating the myths and propaganda that have often drowned socialism, and instead illuminating its genuine virtues."—Glenn Greenwald, co-founder of The Intercept and author of No Place to Hide: Edward Snowden, the NSA, and the U.S. Surveillance State